The Aloe Frill-neck Lizard is gigantic in size and is easily as large or larger than the trees of Wul Jungle. Unlike most plant beasts, it has far more animal-like traits than that of a plant, not even needing to be rooted and fully capable of moving about and eating like a regular animal.

It resembles a giant lizard with pale green skin (although its underbelly has a lighter skin tone) and its body is long in length and its tail is almost equally long, and while it has four legs it mainly moves about with just its hind legs. Around its neck it has eight large prickly aloe leaves which it can stretch out and grow at will. Its head is somewhat small, with beady black eyes and a large mouth with sharp retractable teeth. Despite being a plant, its insides are completely red and pink like a regular animal's.

It is carnivorous in nature and will pursue prey relentlessly once it has spotted a potential meal, however it can be easily distracted by shiny objects and will even abandon its prey to find out the source of the shine and satisfy its curiosity. When alarmed and in serious pain, its aloe leaves will detach from its body.

The Aloe Frill-neck Lizard can extend and control the leaves surrounding its neck like tentacles and use them to capture and ensnare prey, making their versatile movements excellent for hunting and combat. It can move at a rather fast pace on its hind legs, but seems to only be a little bit faster than the average human. This creature has a poor tolerance for spicy foods (such as Mentaikomugi) and inhaling them will cause its leaves to shoot out in all directions and its body to spasm uncontrollably.

According to Sunny, the aloe leaves around its neck have a special moisturizing effect which are good for the skin and cuticles.

When Komatsu and his group were traveling through the Wul Jungle, they encountered the Aloe Frill-neck Lizard which then proceeded to chase after the group and make them its prey. After running from it, they discovered the Wulstar Sauce Fruit Komatsu had been searching for, however the shine of the fruit attracted the attention of the beast who then tried to swallow Komatsu whole. Luckily with some quick thinking, Komatsu while still in the beast's mouth was able to use his Gourmet Spicer to grind some Mentaikomugi into a spice which the beast then swallowed. The spice proved too much for it as its leaves popped out of its neck and it spat Komatsu out as it proceeded to run away in a panic. Its leaves where then taken by Sunny to make a moisturizer. Later that night, an Aloe Frill-neck Lizard and a Flying Peach Squirrel are seen chasing after Zongeh and his followers. 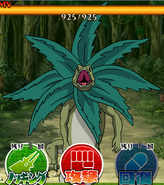 Toriko: Gourmet Battle
Add a photo to this gallery
Retrieved from "https://toriko.fandom.com/wiki/Aloe_Frill-neck_Lizard?oldid=144509"
Community content is available under CC-BY-SA unless otherwise noted.