Edit
watch 01:54
Obi-Wan Finale - The Loop
Do you like this video?
Play Sound

Appolo (アッポロ, Apporo), the Space Cuisine Pioneer (宇宙料理のパイオニア, Uchū Ryōri no Paionia), is a world renowned Space Cuisine chef specializing in the preparation of Space Ingredients and is the head of his own space-themed restaurant. Because of his skills, Appolo is ranked 27th in the world amongst the IGO's Top 100 Chef Rankings.[1]

In truth though, Appolo is secretly a member of the sinister organization known as NEO and is one of the many notable influential figures who flees with them during the events of the 50th Cooking Festival.

Appolo is later freed from Joie's manipulation with the unexpected aid of Midora.

He seems to be a individual with a more expanded upon body-type with his eyes farther apart then a normal human along with the creases of his eyes going towards his massive-elongated nose. The eyes themselves are much more slanted, and his lips more off to the side. Appolo appears to be wearing a spacesuit which would accommodate his world renowned status as the "space cuisine" chef. Finally, his hair resembles thick wavy jello. 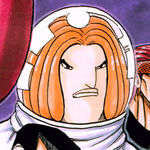 Not much is known about him as of yet, though he appears to have a liking for 'space ingredients'. He also shows some care or at least respect for his fellow chefs as he says goodbye to them before going with NEO and unlike his fellow members he does not attempt to kill or even attack any of his former friends.

Being number 27 on the IGO Chef Ranking, Appolo is one of the top 100 greatest chefs in the world, making him a master chef of great skill and knowledge. A further testament to his great cooking skills is that he is able to make it to the final round of the Cooking Festival, showing that he is both a master chef and a capable athlete.

Appolo makes his appearance as the 13th entry into the Cooking Stadium following Damala Sky XIII.[2] He is able to pass the three preliminary events: Triathlon Cooking, Scale Death Cooking, and Entire Island Cooking. In the Champion Tournament, his opponent is Niis.[3]

He is later seen with with other Festival participants going into the "Hidden Room" made by Pippi. When Ahn tells him to come in with them, he tells them he is leaving. Asked if he is going over to the Gourmet Corp., he tells them he is not joining them, nor the IGO (inferring he is joining NEO).

Appolo is seen leading a group of chefs in NEO Headquarters, having prepared a large meal for unknown purposes.[4]

Following Midora's attack on NEO's Ark, Appolo awakes from Joie's control. Greeted by Zaus, Teppei, and Nakaume, Appolo tells them about Gourmet Material and Joie's plans for it. After holding pieces of Golden Cookware, Nakaume decides to help cook GOD, and Appolo wishes him luck and prepares to face Uumen Umeda.[5]