Asarudy is a Food Spirit, but during life he was a young and handsome man with a muscular body and shoulder-length dark hair who wore simple clothing.

His host is a four-armed humanoid, like many of the inhabitants of Blue Grill, with pointy ears, light skin, dark thick lips, and black eyes with white pupils. He wears an elaborate chef's outfit with a diamond pattern, as well as a flame-patterned apron, pointy boots, and a long chef's hat.

Like his fellow Cooks, he wears an elaborate stylized mask to block out light, which Food Spirits find harsh; Asarudy's is a monkey's face. Under his mask he wears a large pair of glasses.

Asarudy is quite smug and overconfident, viewing his own skills highly while looking down on others without even knowing them. His overconfidence is essentially his greatest flaw as it makes her a poor judge of character and situations, as shown when he underestimated the Human World chefs and the vitality of the Corgolem.

As a member of the Five 10-Shell Cooks, Asarudy possesses extraordinary cooking skills, likely rivaling those of the Top 100 Chefs in the Human World. Due to his age, he has thousands of years of experience in cooking. Like the other Five 10-Shell Cooks, he can hear the voices of Food Spirits. Being a Food Spirit himself, Asarudy cannot normally be seen or interacted with by the living and vice versa. He is also capable of possessing the bodies of weaker beings and making them his own, something which he has been doing for over 3000 years.

He has exceptional reflexes and power of focus, as demonstrated by him reading two books in a few seconds by just flipping their pages; apparently, however, it takes slightly more time for his brain to register the information, as Kakino Kish commented that he was reading even thought he was leaning back in a chair with his eyes closed. Due to him reading around 10,000 books a year, he has developed the ability to see the "patterns" of a story, which grants him a form of precognition; however, when preparing to face the five chefs from Human World, Asarudy himself admits that this skill may not work as efficiently in real life.

Asarudy might be multilingual, due to him reading books with titles in different tongues or at least in different writing systems.

Like those of the other Gourmet World civilizations, the citizens of Blue Grill are descendants of humans who were captured by the Nitro and had Gourmet Cells injected into them. Don Slime recognizes Asarudy as having the strongest cells within Blue Grill.[1]

As with everyone in Area 6, his Appetite Demon is Don Slime.[2] After eating the revived Full Course, he hosts the fully revived and reformed Don Slime.

Asarudy carries a large spatula on his back, which he is presumably very skilled with; although whether he uses it for combat, cooking, or both remains uncertain.

Long ago, more than 3000 years ago, Asarudy was a young man in Blue Grill who was engaged to be married to a young woman named Silk. However he had fallen victim to the Soul Furnace, but promised his beloved that he would be revived in a new body for her sake, and she would honor his promise by waiting for him at the Snow Church where she would pray for his return everyday. Sadly, Asarudy had lost many of his memories by the time he was revived, and was never able to reunite with his lost love, who tragically died in the Snow Church, but her decaying body would continue to endure the test of time while awaiting the return that which would never be.

Asarudy would then spend countless centuries serving as a chef within Blue Grill and aiding in the country's secret project to revive Acacia's Full Course Menu. Eventually he would become one of the Five 10-Shell Cooks.

Asarudy and his fellow Cook, Picnic Bomber, become aware of the arrival of the Human World chefs who had entered Blue Grill, but believe that they would not be strong enough to survive in the world of souls.[6] However, after witnessing Chiyo dice and Knock a fragment of the Corgolem from a great distance away, they inform their fellow Cooks, decide to challenge the Human World chefs directly, and have Mari set up a match between them in Grill Stadium, to see if they are truly as skilled as they claim and if they could survive in the Back Channel.[7]

Moon's movement and consumption of a great number of Food Spirits from Soul Hill interrupted Asarudy's match with Chiru, much to Don Slime's displeasure.[8] At Don Slime's command Asarudy, who was unhappy about the abrupt end to his match, created a Warp Road from Grill Stadium to the Kitchen of Eternity. Don Slime, Jiji, the Ten-Shell Five, and the Human World chefs appeared in front of the line of advancing Food Spirits, who were then blown away by Don Slime.[9]

Asarudy and the other 10-Shell Cooks later volunteered to aid the Human World chefs in their venture into the World of Souls in order to help them prepare the Spirit Food and ANOTHER. After Komatsu successfully completed cooking ANOTHER, the transcendent taste it exuded caused all the souls within the World of Souls to ascend to their true final resting place while Asarudy and his comrades had their memories restored, at which point Asarudy finally remembered the promise he made to his beloved Silk so long ago. With ANOTHER's preparation complete, the Spirit Doors were destroyed and Asarudy and the rest were brought back to the world of the living. With his memories now restored, Asarudy quickly headed towards the ancient Snow Church, where he found the corpse of his long lost love, still seemingly waiting for him. With his love gone, he cried a painful waterfall of tears, and begged for Don Slime to hear his pleas.

Don Slime heard his call and Asarudy told Don Slime that he would become his new host and eat Acacia's Full Course in Ichiryu's absence in exchange for Don Slime granting him what he desired most, to die. Asarudy then awaited as Don Slime began to reform and used his body as his own while warning him of the risks that would come with his possession, as it would result in Asarudy ceasing to be. Asarudy held no qualms as his life began to fade, only being thankful that ANOTHER was able to restore the flavorful memories of the love that he had forgotten so long ago. Asarudy then begged for the forgiveness of his beloved as he began to fade and hoped that he could be with her again. Much to his amazement, Asarudy sees the soul of his beloved Silk after countless centuries as she lovingly tells him that their love has never faded and that they will now be together always. Asarudy then passed away peacefully as his body became the new and mighty vessel for the revived Don Slime.[10]

With the consumption of Don Slime, Neo has also consumed Asarudy.[11] 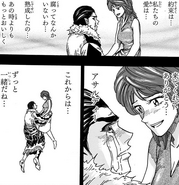