Balbamoth (バルバモス, Barubamosu) is a large, cycloptic, two headed mammal beast residing in Heavy Hole. It is a vicious territorial creature that attacks anything that goes near its nest.

It is a large creature who easily dwarfs the 7-foot-tall Toriko in size. Its necks, tail, and back are covered in some kind of shell-like armor and it has a spotted pattern covering the exposed part of its skin. Each of its two heads has one eye each and fearsome, fanged maws.

It burrows holes in the walls of Heavy Hole and makes its nest in them. It can easily burrow through the rocky interiors of Heavy Hole and pop out almost anywhere, allowing it to ambush its opponents. The Balbamoth has evolved unique feet that allow it to crawl up vertical walls and trees. It snatches prey with its two long, shifting necks. Balbamoths specialize in hunting in packs, and when dozens of Balbamoths amass, they boast the same combat power as a fully armed military platoon.

A large group of them attacks Toriko during his search for Melk the First in Heavy Hole, but he manages to escape them. Later on the ones that were defeated by Toriko are eaten by the Scorpion Demon Cattle.

In Toriko: Gourmet Survival 2, the Balbamoths are shown to have a variety of different subspecies: 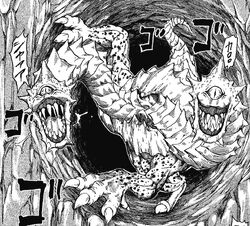 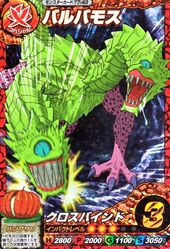 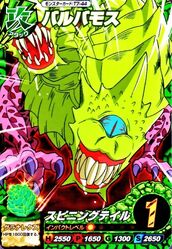 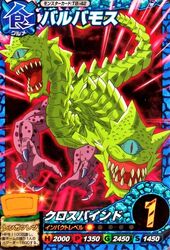 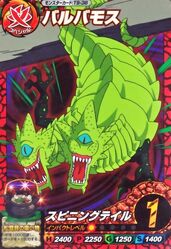 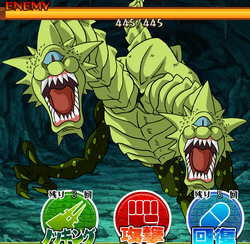 Balbamoths have been featured on several collectible trading cards. Due to their color scheme not having been revealed at the time of the cards release, its arms were colored pink rather than green.

Retrieved from "https://toriko.fandom.com/wiki/Balbamoth?oldid=136284"
Community content is available under CC-BY-SA unless otherwise noted.