For the Monkey King that uses his deceased lover's name, see Bambina.

Bambina (バンビーナ, Banbīna) was a female Ballboon and the deceased mate of the notorious ruler of Area 7, the "Monkey King" Bambino. After her passing, Bambino took her name as his own in her honor, and continued to love her profoundly even long after her death.

Bambina was a slender and feminine-looking monkey with light-colored skin and dark patches of fur around her waist, shins, forearms and chest. She had long and messy but shiny black hair. As the mate of the Monkey King himself, it is likely she was considered extremely attractive by the males of her species.

Unlike the rest of her body Bambina's face was rather masculine by human standards, apparently typical for female Ballboons. In a comedic twist, it is revealed that the braggart bishokuya Zonge strongly resembles Bambina, especially when he is briefly transformed into a female due to the effects of consuming the mystical soup PAIR. The resemblance even fools the Monkey King himself, who becomes overjoyed at the apparent return of his long-departed lover. 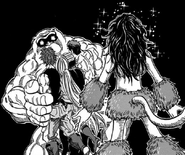 Little is known about Bambina's life or personality. It is evident that she shared a strong bond of love with her mate Bambino, even dancing with him one last time before returning to the afterlife in a brief reunion enabled by the powers of PAIR. Her tomb has what appears to be a kite and several toys, suggesting a playful nature and fondness for toys and games.

Not much is known about Bambina's abilities. Nevertheless, she was capable of performing the complex and extremely rapid Ballboon mating dance with the incredibly powerful Bambino. As such it can be inferred that she was a skilled practitioner of Enbu with great speed and agility.

In the past, Bambina was the beloved mate of the Monkey King then known as Bambino, and the two loved each other deeply. The courtships of the Monkey King were evidently very important to the ancient civilization of Area 7, which depicted the mating dances of the Ballboons in murals. Considering that a group of low ranking monkeys instantly recognized Zonge as Bambina (due to an uncanny coincidental resemblance) and immediately carried "her" to the Monkey King, it is likely Bambina was nearly as famous as her mate.

Eventually, Bambina passed away under unknown circumstances. Upon her death her mate Bambino built a humble tomb to his beloved on the location that would become 100G Mountain, knowing that the intense gravity of the area would draw in ingredients so that his love would always have as much food as he had sought to give her in life. The mountain range which then formed would also serve as a tribute to her for all time. The Monkey King then took his mate's name as his own, and made his home atop the mountain where she was buried to guard her tomb.

When the Four Heavenly Kings challenged Monkey King Bambina to an Enbu match in order to acquire PAIR, they did not know that the ritual they were performing was in fact an ancient Ballboon mating dance, the very dance the Monkey King had performed with his mate long ago. After the dance was completed (and following some brief complications) PAIR finally detached, and the unique effects of its release allowed the Monkey King to see into the world of dead, giving him a moment to dance with his deceased love Bambina once again.

The tearful and joyous Monkey King quickly ignored the Heavenly Kings and began to the dance with his mate. However, he became briefly angered when the Blue Nitro known as "Kaka" interrupted, and the Monkey King unleashed a blast of appetite energy at the Nitro, blasting it across the planet. With the dance over, Bambina returned to the afterlife and 100G Mountain began to collapse. When the mountain crumbled away, Bambina's tomb came into view and the Monkey King made his way into the tomb to pay his respects one last time.

Later, during the continent-wide celebration of the capture of PAIR, a group of monkeys seem to recognize Zonge, who had been temporarily turned into a female by the effects of PAIR. The monkeys reverently deliver Zonge to the Monkey King, only for the reason to be comically revealed: in his female form Zonge happens to strongly resemble the surprisingly masculine face of Bambina. Overjoyed once more, the Monkey King enjoys another dance with his 'mate', raining kisses on 'her' face until 'she' passes out.