Barbecue Pigs are a species of large pigs which only appear in the Toriko x One Piece Crossover special.

They have five red stripes on their backs which are actually vents that help release any excess heat or smoke that's created in their bodies, however if they heat up with anger too much their vents will begin to glow orange and their bodies will become burnt and inedible, that's why its important to finish them off in one hit.

Although they are herbivores who only eat herbs and ghost truffles, they are very territorial and can be very violent and aggressive, their anger also causes their bodies to heat up to cooking temperature thus making them living barbecued pork (hence their name) and because of their diet of herbs and truffles the taste of their meat is made even more delicious. This species inhabits the mysterious Hungry-la Island.

Because of their already cooked bodies they can be eaten raw. Their meat is rich in fat and their diet of herbs and truffles gives them a natural spicy fragrance.

A pack of these wild beasts attacked Toriko, Komatsu and Terry as well as the Straw Hat Pirates. They were easily defeated by Toriko, Luffy and Sanji soon after and their meat was prepared by Sanji and Komatsu into a fine meal. 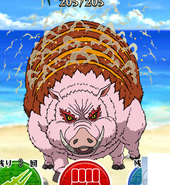