The Batallion Yeti (バタリアンイエティ, Batarian Ieti) is a herbivorous monkey that once inhabited the Battalion region. The species went extinct due to infrequent breeding, but thanks to cloning technology at the IGO Gourmet Research Laboratory, the Battalion Yeti was revived. The Battalion Yeti's eyes are imbued with high amounts of DHA and EPA (chemicals that activate brain cells). Experiments are underway to mate them with animals that have higher reproductive rates, in hopes of stabilizing the population.

The Battalion Yeti is a tall lanky ape with scraggly yellow fur standing at least 2 meters in height. It has very long limbs which adds to its lanky and thin appearance. Its most notable feature is its large, unsettling, cat-like, red eyes which can be quite unnerving to those who are stared at by it.

After arriving at the 1st Biotope, Toriko and Komatsu are given a brief tour of the area and in the research lab Komatsu is spooked when he comes face to face with a Battalion Yeti. Luckily the beast is inside a protective glass cage. A brief explanation is given about the Yeti's status as a revived species and Chain Animal.

In the anime adaptation of Chapter 20, the Battalion Yeti's scene was changed and was instead replaced by an octopus and no mention of it was made. 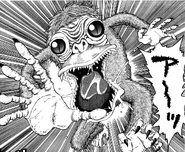