Biotope 1 (第1ビオトープ, Dai 1 Biotōpu), also known as Regal Island (リーガル島, Rīgaru-tō), is the largest and most productive of all the IGO's Biotopes. Located on a continent to the south of Toriko's home, it encompasses the Regal Plateau, the current habitat of the Regal Mammoth. It also houses the IGO Research Lab, where nearly 30% of the world's ingredients are produced. The 1st Biotope is presided over by Mansam, the IGO's third-highest-ranked official, after the President and the Vice-President. The island spans 500,000 square kilometers, and with 5000 meter tall mountains enclosing it in its entirety.

The Biotope's current state of function is unknown as it was recently invaded by the "Four Beast" Gaoh which managed to kill a Regal Mammoth with one blow and caused serious damage to certain parts of the Biotope, and its state after the fall of the Meteor Spice or whether it was even affected by it remains unknown as well.

The beasts on Regal Island have an average Capture Level of 27, making the area dangerous even to Gourmet Hunters.

The beasts in the coliseum were brought there from their homelands to test their strength and determine their capture levels and are not native to Regal Island.

At unknown point in the past, Ichiryu hid his main dish somewhere in Biotope 1 and tasked his pupils to one day seek it out when they were ready. He hid it here for safe keeping so that one day it could be used to aid the world during a massive food shortage.

Toriko was called by the IGO directors to come to Biotope 1 to aid in the capture of the Regal Mammoth's Jewel Meat. Toriko, accompanied by Komatsu were then escorted to the biotope by Johannes via helicopter. Upon arriving, Toriko would reunite with several old friends that Komatsu would meet for the first time, such as Mansam, Rin and Sunny, and Toriko would also adopt there a young Battle Wolf named Terry Cloth, and together they traveled the island and braved its dangerous areas until they found the Regal Mammoth and recovered its Jewel Meat after fighting the Gourmet Corp. for it. The group then ate some of the Jewel Meat at the biotope's Gourmet Research Laboratory and had a pleasant time.

Toriko and Coco paid a visit to each of the IGO Biotopes which held the ingredients from Ichiryu's Full Course. Although it was not shown, they successfully captured the ingredients from each Biotope, with the exception of the first which they realized would require the cooperation of all the Four Heavenly Kings in order to acquire it.

During the Four Beast's attack on the Human World, the Beast King Gaoh attacked the 1st Biotope and easily killed a giant Regal Mammoth with one swipe of its claw.

When Toriko and Komatsu returned from the Gourmet World, they, along with the rest of the Heavenly Kings, once again visited Biotope 1 in order to find Ichiryu's Main Dish. Biotope 1 was completely demolished due to Zebra's rampage however there were still enough of the original ground for Toriko track the scent of past visitors, including Ichiryu. Biotope 1 itself held a Rest Room which was noticed by Toriko as it was completely clear of rubble after Zebra's Rampage. The Rest Room held Ichiryu's Main Dish, the Billion Bird's Egg and was previously home to the Nitro, Chichi. Biotope 1 also held a Gourmet World beast, the Octomelon, which hid underground for many years until it would awaken to assist the Heavenly Kings and Komatsu through their journey to the Gourmet World. 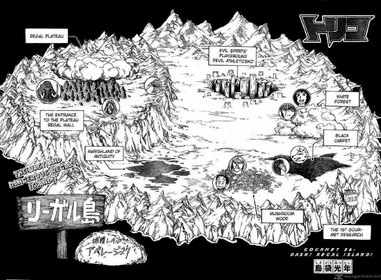