Bogie Woods (ボギーウッズ, Bogīuzzu) is the Chief of Gourmet Corp.'s 5th Branch, the Food Preparation Team. He has a motif of being like a hermit crab, "lodging" in other creatures and manipulating them like puppets with his skeletal abilities. He is one of the main antagonists of the Ice Hell Arc.

In his first appearance he wears a jogging suit, sport shades, and a strange assortment of shells and crustacean limbs (which could possibly be part of his skeleton), which concealed the majority of his face from view. He also wears a mask made from the face of a Gourmet SP that he used his ability on.

His true appearance is that of a thin, young, light-skinned man with serpentine-like eyes, semi-unruly hair, and two asymmetrical fangs, one pointing upward and the other pointing downward. Above his left eye is a marking with an appearance similar to a bar code. However, despite his somewhat "normal" appearance on the outside, on the inside he possesses a truly disturbing skeletal structure which is almost inhuman in form, possessing at least 4,000 bones and 4,600 joints, which he can easily manipulate and rearrange in anyway he pleases and allows him to move and bend his body in very disturbing ways.

Bogie demonstrates significant arrogance and a tendency to look down on others, as seen in his initial appearance when he looked down on Cedre for failing on his duties. He also cares little for the lives of others, seeing them only as possible lodges on which to use his ability.

Regardless, Bogie demonstrates some respect for his superiors, as his motive for abandoning Tommyrod to escape the Parasite Emperor was his confidence in the Vice Head Chef’s survival ability.

He has approximately 4,000 bones and 4,600 joints, which he can easily dislocate and manipulate. He also has flexible muscles, allowing him great mobility and flexibility. Even if his bones are broken and removed, he can manipulate the rest to compensate for it immediately, barring the sacrum. However, even if the sacrum would happen to be removed or dislocated, his body will adjust in time and repair the nervous system, this process takes time but will be fully healed afterwards.

Due to his abnormal skeletal structure and flexible joints and muscles, he can lodge into the bodies of living things. He only removes the bones of the body, leaving the blood vessels, nerves, muscles, and internal organs intact. When he enters a body, he essentially acts as the skeleton and operates the nerves. He can utilize the potential the bodies had while alive, and can also speak using their original voice. Perhaps due to his understanding of how the hippocampus works, he can even bring the mannerisms of the lodged body back to life.

Bogie relies on the fact that he has 4,000 bones and 4,600 joints to target a creature. He has entered the bodies of all of the wild beasts he has prepared, and has become familiar with the internal workings and systems of living things. He has developed techniques such as: revitalizing organs and tissues, understanding the flow of neural transmissions, and deciphering the hippocampus.

He uses a sickle and a weight to simulate a kusarigama in the manga, and is able to transform his hands into the sickle and weight in the anime. The most dangerous thing about his fighting style is how unpredictable it is. Since his skin and flesh is very elastic he can stretch and move his limbs with the agility of a snake.

Bogie Woods first appears at a banquet headed by Kuromado, commenting on the uselessness of the GT Robo and lampooning Cedre for relying it, which prompts an arguing match between them. Both are interrupted by Starjun, who slams his fist on the table and sends the ingredients into the air.[5]

Bogie sneaks on board the boat boarded by other Bishokuya, disguised as an IGO agent, whom he hollowed out for his lodge. Later, he kills several other Bishokuya, trying them on as possible lodges.

When all Bishokuya are considerably far from the Tundra Dragon, Bogie approaches it and a sleeping Barrygamon. The three then head towards Ice Hell to take the Century Soup.

Bogie takes interest in Takimaru's ability after the latter forces him out of his IGO agent lodge, prompting Bogie to fight with his own body.[6] He easily injures Takimaru while disregarding his attacks, as the Gourmet Knight's Corkscrew Shot has no effect on his flexible skeletal structure.[7] In his arrogance, however, he injures Takimaru at close range and, unable to remove his sickle, has his sacrum removed, becoming largely immobilized.[8] He attempts to retrieve the sacrum, only to have it destroyed by Match in the his fight with Barrygammon.

Bogie thus collapses, paralyzed until his other bones substitute for the sacrum he lost, allowing him to regain enough mobility to escape the Parasite Emperor released by Tommyrod. However, he and Barrygamon are eaten by the Hellboros revived by Teppei[9] and are later freed from the Hellboros by Alfaro.[10]

When the Gourmet Corp. began their assault on the Cooking Festival, Bogie, Jerry Boy, Cedre, and Barrygamon attack from the air and soon make their way into Cooking Stadium where they face off against the Gourmet Knights and the Gourmet Yakuza. 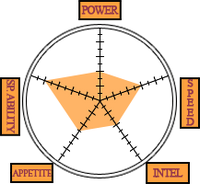