This article pertains to the ingredients in the Shokurin Temple. For the Gourmet Casino's Food Concentration ingredient, see Bubble Seashell.

The Bubble Fruit (シャボンフルーツ Shabon Furūtsu) is a legendary ingredient that was gifted long ago to the Shokurin Temple and it is their most sacred treasure. It was one of the seven ingredients on Ichiryuu's List which Toriko needed to fetch in order to complete his training for Gourmet World. 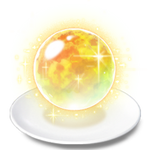 It is a luminescent golden orb that sparkles like a gem and is lighter than air, and has a liquid like appearance that makes it resemble a bubble, hence its name. When in hiding in Bubble Way, the fruit lumps together and take on the shape of bubbly clouds. When cooked the fruit does not lose its shine, although it gains a somewhat deflated look.

The Bubble Fruit can only be found while traversing the long and arduous Bubble Way. The fruit will only show itself to those who show complete and absolute gratitude for food. The only method shown so far to achieve this is showing very great honor to food as Toriko was very hungry and he nearly died and in the final moment he thanked in a very honorable way to the food which has been the flesh and bones of himself. It is used to achieve Food Immersion for if one manages to capture the fruit in the Bubble Way, they unlock the ability.

This ingredient is difficult to cook even for those who have mastered Food Honor. It took a week for Komatsu to learn to cook the fruit even with the help of Chiru, who, while being the 15th ranked Chef in the world and a master of Food Honor herself, is not yet capable of preparing the fruit. The fact that Chiyo and Komatsu are able to prepare it shows that they are geniuses at cooking. When cooked, the Bubble Fruit becomes more jelly like in constitution. According to Chin Chinchin, cooking the Bubble Fruit involves peeling the thin skin of the fruit before boiling it which will increase the depth and savoriness of the fruit.

According to Toriko, after every bite the carbonation of the fruit floods out, the fruit tastes like a champagne jelly as sweet as honey, and apparently, if cooked properly it will taste even more delicious. The fruit's taste and nutritional value is so potent that it can even help the development of one's Gourmet Cells.

The "empty" Bubble Fruits are unique hollow soap bubbles which can be found floating out of a small pond in the Shokurin Temple garden and are created by Chin Chinchin to test those who seek the real Bubble Fruit, and if one can capture it, they will be allowed to enter Bubble Way. It is so frail that even looking at it fiercely can make the bubble burst. To handle this fruit it requires a minimum of "Top Class" level of Food Honor.

During Toriko's and Rin's wedding, small pieces of the Bubble Fruit was added into the Rainbow Fruit jelly along with Dodurian Bomb and Surprise Apple.