The Caste Leo is a species exclusively found in the Toriko x One Piece Crossover special. They reside on Hungry-la Island.

It is an odd species of lion whose mane appears to be made out of delicious castella (Japanese sponge cake) instead of hair.

They are very vicious and strategic and rarely aid other animals unless forced by one of higher strength.

It is a strong and agile lion with great strength thanks to its great size. Its castella cake mane is not only delicious but these also sponges act like powerful amplifiers, allowing the Caste Leo to fire its roars in the form of a sonic blast.

Their manes make an excellent dessert much like all the other ingredients on Hungry-la Island.

Toriko, Komatsu and the Straw Hats encountered a Caste Leo while on Hungry-la Island. The beast proved to be quite formidable, able to shoot out sonic beams that launched the group into a nearby whipped cream river. 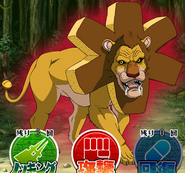 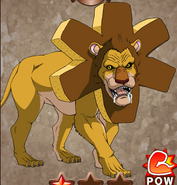 Retrieved from "https://toriko.fandom.com/wiki/Caste_Leo?oldid=151531"
Community content is available under CC-BY-SA unless otherwise noted.