Chako's Grandpa was a poor man from the slums of Area 6 who was taken to be a part of the Soul Trade in which he was sacrificed to continue the civilization's ancient project. Despite this, he was able to come back via the Soul Trade into a new body which he used to watch over his grandson and daughter.

The appearance of his original body is unknown, but he was likely a man of old age.

After being revived by the Soul Trade, his new body was that of a short middle-aged balding man with a short thick beard who wore simple and tattered clothing. He also wore an intricate mask like most Food Spirits who are unable to stand the light of the living world.

He is a very humble and kind old man who loves his family, but his own shame and fearfulness kept him from doing more, a fact which he deeply regretted. He was also very pessimistic and had very little hope for the future due to his experience in the Soul Trade and seeing the dark secrets of his homeland, but after meeting Komatsu, who saved his family, his hope for life was restored once more. 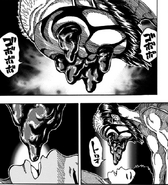