Chiyo's Scum Beast was a giant bird-like Scum Beast who acted as Chiyo's personal steed prior to its demise.

It is a giant skeletal bird resembling a vulture, with brown bones, an exposed rib cage with visible organs, orange and yellow feathers covering a few parts of its body and it is missing its left eye.

Since this bird seems to be missing vital parts that would normally be necessary to keep it alive (like flesh and organs), it is likely that it was once slain by a person that is capable of using "Food Honor", presumably Chiyo herself.

Unable to notice its own demise, the bird has continued to move on as an "undead" creature and seems to be completely unaware of its current state as it still tries to eat and behave like a normal creature.

Chiyo, Ootake and a Scum Beast rode this large bird to Shokurin Temple in order to destroy the temple and slaughter its inhabitants. Upon arriving, the group began its assault on the temple, with Chiyo's beast attempting to eat as many people as it could, however it was unable to do so as it lacked a throat and all its prey kept falling out of the back of its jaw.

When Starjun goes to the Shokurin Temple to pick up Chiyo and Ootake, Chiyo's beast was eaten by the Big Bang Shark. 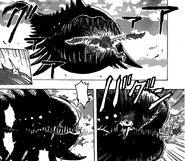 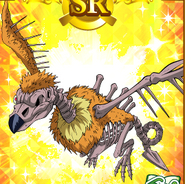