Darin (ダリン, Darin) is the owner chef the giant restaurant "Jumbo Food", and specializes in the preparation of Giant Cuisine (巨人料理, Kyojin Ryōri). His unique giant cuisine and great skill as a chef has earned him a spot on the IGO Chef Ranking at number 25, making him the 25th greatest chef in the world.[1]

Darin is a man of enormous stature and girth with a long, pointy nose, very hairy arms and long, dark brown hair, somewhat giving him the appearance of a giant goblin. He is the largest and tallest human seen in the series so far, even surpassing the likes of Melk the First. His attire consists of a white chef's uniform with a white toque and apron.

Not much is known about Darin's personality yet.

He is one of the 32 chefs that successfully finishes the first event "Triathlon Cooking", despite Brunch sabotaging the course, and is able to pass the other preliminary events, allowing him to move on to the Championship Tournament where he will face Setsuno in a one-on-one cooking match.[2] 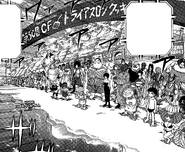 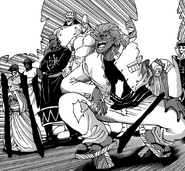