The Daruma Hermit (ダルマ仙人 (ダルマせんにん), Daruma Sennin) is an elderly chief who is the leader of the Hex Food World, a land inhabited by many unique creatures and also from where Brunch originates. He is the owner of a Daruma Horse and is himself a Daruma.[1]

He is a Daruma and as such he has an elderly appearance, large round eyes and facial markings of a Daruma along with a round nose and a long beard and mustache. He has a very large body and might be the largest living individual in the Hex Food World. He has a round body and short legs and his arms almost reach his knees. His long beard covers his chest. Brunch describes him as "seriously ugly".[2]

Not much is know about his personality, however he appears to be a charitable individual who gave Zebra his Daruma Horse and a tribute. He also appears to be friends with Brunch. Brunch claims that the hermit is so ugly that he'd be jealous of anyone who is less ugly than him. He also has a perverted nature as he peeked the Kappa female bath at the Kappa Hot Spring. [3]

The Hermit has not shown any physical prowess but he seems to have vast knowledge on the Gourmet World which are not even known by the people of the Hex Food World. He also seems to know something about the items of Acacia's Full Course Menu and takes rational decisions which have made it possible for Hex Food World to survive and prosper.

Because he comes from Hex Food World, Daruma Hermit is descended from humans who were captured by Nitro and injected with Gourmet Cells.[4]

The Daruma Hermit's existence was first hinted at when Zebra told Komatsu his Full Course, which had the "Daruma Hermit's Tribute" as his dessert.[8]

He was briefly mentioned by Zebra as being the one who loaned him the Daruma Horse.

He is mentioned more than once during the Cooking Festival, such as when Brunch mentioned that he heard about Zebra from him, and later after Brunch defeated Elg he proceeded to tell him about the "ugly" hermit, explaining that someone like the hermit would find Elg handsome and be jealous of his looks.[9]

After Jiro arrives at Cooking Stadium and displays his great power, Brunch is shocked that this was the same Jiro the Daruma Hermit talked about.

Later Atashino and Melk the First took him on a wheelchair to the Atmosphere Garden to help him recover his health as the region had high levels of oxygen and the sickness he had resembled altitude sickness. The Daruma Hermit stayed in a region with unstable atmosphere for long time and hence is the reason for his poor health. The Daruma Hermit then states that the Horses that live on Nightmare Hill eat air, so for them breathing is equal to eating. He goes on to explain to them some of the abilities of Heracles, and finally reveals about AIR which grows on the Giant Air Tree. Though the Daruma Hermit possesses the technology for handling AIR he is unable to win against the Blue Nitro and was unable to harvest AIR. Since the decline of the Horse King might be the end of the continent, the Daruma Hermit could only provide sacrifices to make fertilizer for the Air Trees and become food for the horse king.

However, when Melk I states that he believes that Komatsu and Toriko will be able to complete the mission without sacrifice, the Hermit curiously inquires why. The Daruma is then surprised that, just as the artisan was about to respond, Melk's Amplifier Stone comes loose, making his response inaudible. 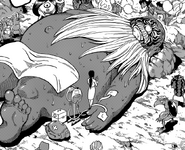 Daruma Hermit's debut in the manga 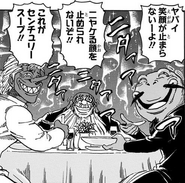