Death Falls (デスフォール, Desu Fōru) is one of the three great waterfalls of the world and is located in the Mors Mountain Range. It is also called Executioner's Falls (処刑の滝, Shokei no Taki) because it kills anything that enters it like a guillotine.

Water pours down at a rate of 1 trillion liters per minute, and the waterfall is 1 kilometer wide. It is said no matter how many missiles you fire into it, not one will make it through. The water is filled with rocks and sand making it even more dangerous. It also causes the water below to turn like a giant washing machine, ripping apart anything inside it. It is said any human that is caught inside will be smashed into unrecognizable pieces. It is one of the few places in the Human World that is said to come close to rivaling Gourmet World in harshness. Likewise it is one of the few areas in the Human World that is left intact after one of the Four Beasts, specifically Invite Death, travels through it.

A Regal Mammoth sized beast being crushed by Death Falls 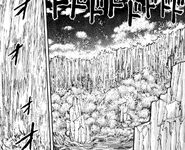 Death Falls trading card
Add a photo to this gallery