The Death Gore (デスゴール, Death Gore) was a super gigantic herbivorous species from ancient times whose existence brought the world into a state of near-annihilation. It was said to have been born from a mutation and its horrific appearance combined with its destructive nature made humanity believe that it was an incarnation of the Devil.

With 50 meters of height and 20,000 tons of weight, a single one of these grotesque creatures could devour whole forests and was easily the size of a small mountain. Because of their horrific diet and appetite their weight also tended to vary among individuals.

These creatures were grotesque in appearance, sporting sickly green and oily skin, veins protruding all over their body, hunched postures, obese and flabby bodies, scaly backs, a pale underbelly and untamed thick green hair, making them truly disgusting in appearance. Their faces were large and swollen including their gums which were even larger than their small sharp teeth. They had a single orange cycloptic eye in the middle of their forehead and two orange orbs on their cheeks which appear to be glands or an extra pair of eyes and on the side of their heads they had a pair of three long spikes jutting out. They also had a row of small yellow spikes going down vertically on their back.

Death Gores are voracious ravagers with a one-track mind that are only capable of eating endlessly until there's nothing left, aimlessly going wherever there is food to be had. Death Gores always traveled in packs, showing that they were quite social and cooperative with one another.

Death Gores were incredibly fast eaters, laying waste to entire forests with ease showing that they had a strong digestive system and metabolism. Aside from this not much else is known about their strength, however an entire pack of Death Gores were powerless against a single Battle Wolf.

In the game Toriko: Gourmet Monsters, Death Gores are shown to be quite powerful and that they grow to gigantic sizes and can even challenge the strength of a Regal Mammoth.

Death Gores were inedible and as such have no value as food. However, in Toriko: Gourmet Monsters, it is mentioned that a special type of fungus grew exclusively on the body of Death Gores which was known as the Big Bang Mushroom (ビッグバンキノコ, Biggubankinoko), a very rare and delicious mushroom filled with the essence and nutrition of all the ingredients eaten by the Death Gores. The taste of this delicious mushroom is so intense that it feels as though a tremendous explosion of flavor and excitement has gone off inside the eater and spread throughout their entire being. Its effect is so potent that it briefly makes the eater unable to control their emotions and may abruptly start suffering from intense mood swings. Due to the Death Gore's extinction, this mushroom became extinct along with it and is now nothing more than a name in the history books.

These creatures existed long ago in ancient times and were said to have come into existence from a mutation and were born with a voracious and monstrous appetite which lusted for all the greenery on the planet.

Traveling in a single pack, the Death Gores devastated entire continents to an extent comparable to volcanic eruptions or climate change, and were considered a global catastrophe, devouring forests and resources like nothing and leaving only barren wastelands in their wake.

One day the entirety of the species was brought to extinction when the Death Gore pack entered the territory of a single Battle Wolf who slaughtered all the Death Gores in an instant, earning itself a place in history as a legendary king. The legend of the Death Gores is still well known and to this day they are still considered an incarnation of the Devil.

The Death Gores have a prominent role in the game Toriko: Gourmet Monsters for the Nintendo 3DS, where they appear as antagonists. One also appears as a tamable beast for Gourmet Royale battles.

During the game's story, Death Gores were cloned back from extinction by the power-hungry millionaire Kimera using the research of his parents who were once IGO researchers, and Kimera planned to use the revived beasts as his own personal army of enforcers and hunters. Because of their revival, these beasts threatened the world's food supply once again, but unlike before they are now larger and stronger than ever, with some even being the size of a Regal Mammoth, and to make matters worse a new breed of Death Gore created by Kimera has come into existence known simply as the Death Gore Chimera which unlike a normal Death Gore, is omnivorous, more powerful and an aggressive beast that will eat everything it sees including the entire world, thus forcing both the Four Heavenly Kings and the Gourmet Corp. to work together in order to stop it and the other Death Gores. Matters then worsen when Kimera fuses with his Death Gore Chimera, becoming an intelligent and powerful foe, luckily the Four Heavenly Kings and their animal partners were able to destroy the chimeric abomination. Despite that the Death Gores were killed once more by the Heavenly Kings, Gourmet Corp., and their animal partners, one Death Gore still remained which was then tamed by the Heavenly Kings and made into a less dangerous for the planet and they would use their new animal partner in Gourmet Royale battles. What would become of the species after this is unknown.

The Death Gore has been featured so far on two trading cards of the Trading Card Game and has also been released as a miniature figure. 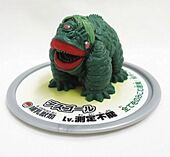 Add a photo to this gallery
Retrieved from "https://toriko.fandom.com/wiki/Death_Gore?oldid=144469"
Community content is available under CC-BY-SA unless otherwise noted.