Death Season Forest is the dreaded forest located beyond the Gates of the Underworld and it is here where Honey Prison hangs over. It is a giant expanse of land covered in needle-like grass as tall as buildings, and numerous highrise rocky roads extend from the gateway to all across the forest.

The reason for its name is that the forest has its own unique seasons, that unlike the regular four seasons, they are all deadly and cause horrific changes in the environment. The seasons are known as Freeze, Monster, Lava, and Fog, and each one only lasts for about three months. Its environment is so fierce that it is considered no less dangerous than the Gourmet World's own seasons.

During the Freeze season, from December to February the temperature drops to -200 C and the strong blizzard brings icy wind that freezes up all the grass and forms it into the shape of sharp spikes. Throughout its three months the freezing cold winds never stop, ever freezing all in its path.

During the Monster season, from March to May hundreds of vicious monsters that have been hibernating awaken from their slumber and spread havoc and violence all around them. The average capture level of these awakened beasts is around 60 but the most powerful among them is known as the Magma Tortoise aka the "Monster of the Forest" with a capture level of 70.

During the Magma season, from June to August the surface of the forest erupts with boiling lava causing the temperature to exceed 70 C. Just the air temperature alone can burn human skin and cook one alive.

During the Fog season, from September to November the forest becomes completely covered in a thick blinding fog that blocks everything past one meter of vision. This fog is made up of a dangerously potent poison gas; breathing it once will cause difficulty breathing, a second inhalation will make one loose consciousness and cause damage, and a third will stop one's heart and the breather will contract the full effects of the painful and deadly poison and die. The gas is also flammable. 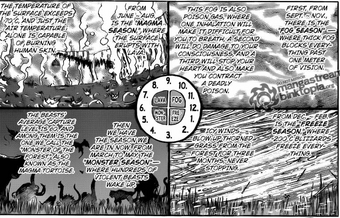