Denden Snakes (デンデンヘビ, Dendenhebi) are a species of snails which resemble snakes. They live inside the cavernous innards of the Regal Mammoth's body in large numbers, however whether their relationship with their host is a symbiotic one or a parasitic one is unknown, but they will attack any intruders who enter the body.

Despite their snake-like appearance they are in fact serpentine mollusk beasts and are not considered reptiles or mixed breed beasts. Denden Snakes normally stand at 2.3 meters in height and 3.8 meters in length, however the size of a Denden Snake varies depending on their habitat and the bigger it is the higher its capture level is as well. The shell on its back blends with the rest of its body perfectly, making it look as if its just coiling up the center of its body to further its snake-like appearance and is able to hide in it like any snail. They also come in four variety of colors: green, blue, yellow and purple.

Just one touch from this snail will send deadly poison coursing through one's body, so it's best not to attack it with bare hands and use strong weaponry instead, unless the attacker has a strong immunity to the poison. The Snail Snake also defends itself by hiding in its shell, a piece of its anatomy it uses to impress the opposite sex.

The Capture Level of these slimy serpents depends on the specimen's size, with the one found inside the Regal Mammoth being a Capture Level 4. Snail Snakes up to Capture Level 20 have been found in the wild.

According to their name they may have some sort of electricity producing ability like the electric eel, but this has yet to be seen.

Denden Snakes in the manga 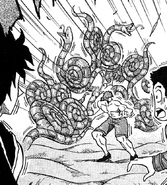