The Denshark (電シャーク, Denshāku) is a species of Camping Monster that lives in the Area 7 continent of the Gourmet World. One was used by the Four Heavenly Kings during their journey in Area 7.

The Denshark has the head of a shark but its rear body is like a train with numerous cars which extends to a great distance. Its final car is incredibly huge and can even house a young Mother Snake. It has wheels on its lower body so it can travel through land and water alike. It has a body length of about 2 kilometers.

The Denshark has an extremely violent temper and seems to be interested in eating even its passengers.

The Rest Room produced in the head car has a stronger capability than the other cars while the rear ones have weaker Rest Rooms.

It is capable of vomiting a corrosive liquid onto the ground, creating a puddle deep enough to submerge the entirety of its 2km long body, allowing it to hide from stronger beasts.

Autotomy Mode (自切モード, Jisetsu Mōdo) is an emergency measure used by Camping Monsters when attacked. It hides all of its presence in its torso on occasions when it can only get away as just a head. It temporarily becomes a perfect safe zone, even capable of evading the effects of extreme gravity. However in this state it is incapable of moving. Its body regrows after 2-3 days.[1]

When the Four Heavenly Kings make it to the Island of the Future and are prepared to leave Area 8 and head for Area 7, the Daruma Hermit calls a Denshark to escort them to Area 7, as Octo-chan would be heading back to the Human World to deliver AIR. At first, the beast proves to be quite aggressive and even tries to eat Toriko, but it is quickly beaten and tamed by Zebra. After boarding the Denshark, the group heads out to Area 7 on the Rainbow Bridge.

While on their way to Area 7, the group appears to be attacked by giant sea urchins, but these "urchins" are actually giant pollen. When they arrive in Area 7, the group is greeted by the local giant fauna but are spared their wrath due to Bambina not giving the beasts permission to hunt them. A lone monkey then boards the Denshark after receiving permission from Bambina, and though it is quickly defeated by Zebra, it is able to call others of its kind to attack the Denshark before being killed.

As the Denshark is attacked by various monkey type beasts of above Capture Level 600, the Heavenly Kings as well as their Animal Partners step out to defend it and Komatsu within. After the Kings fend off the monkeys for a while, all the primates simultaneously react to something and quickly kneel in the direction of a giant beast. With everyone distracted, a Sandoriko pops out of the ground before diving back in, causing the Four Heavenly Kings, their Animal Partners, and the Denshark to fall into a pit. They then find themselves in Area 7's Ancient Civilization's ruins, being greeted by "Kaka" who aids the Kings in reaching the location of PAIR.

After several conflicts, the Denshark is able to take the party across the massive expanses of Area 7 and reach the location of PAIR, the Birth Cry Tree. However "Kaka" then reveals that the current PAIR is actually a part of "Monkey King" Bambina's body, his testicles. The Denshark takes the party as close as it can to Bambina's territory, the 100G Mountain. After the Kings are defeated by Bambina's overwhelming might, "Kaka" takes them to a secure location where the Kings can train in Enbu until they are ready to challenge Bambina again. However, during this time they are unable to use the Denshark as Bambina's immense power caused it to enter Autotomy Mode.[2]

When the Kings are finally ready to challenge Bambina again, they head up the 100G Mountain while carrying the comatose Denshark, which holds the unconscious Komatsu within it. During their battle with Bambina, "Kaka" reveals more sinister motives and enters the Denshark to attack or kidnap Komatsu, but when the 'Komatsu' inside is revealed to be nothing more than a Poison Doll, the Nitro becomes deeply enraged. However, at that moment the Denshark's Autotomy Mode finally wears off, causing it to succumb to the intense gravity of the 100G Mountain and be sucked into the mountain where it is crushed by the intense pressure. "Kaka" manages to survive and escape the Denshark's body despite the intense pressure within its insides.[3]

Later on, Terry Cloth, Kiss, and Quinn find the Denshark, which is barely alive, and leave it where the Heavenly Kings might find it. When the Kings find the dying Denshark, Komatsu is shocked after seeing this creature for the first time, but upon learning that its their Camping Monster, he uses the regenerative properties of his Derous Knife combined with PAIR to heal the Denshark fully, which quickly becomes vibrant and lively once again.[4] 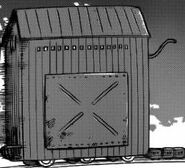