The Devil Crocodile (デビルクロコダイル, Debirukurokodairu) is a giant crocodile that, with its great size, has been the most ferocious of its kind in the Human World since ancient times.

It is a giant crocodile that has a length of 21 meters and weighs 16 tons, making it truly the largest breed of crocodilian seen in the Human World, making it even larger than the Galala Gator. Its back is covered in a row of numerous spiky spines along with six curved black horns jutting out with three on each side of the row of spines. It has a vicious expression with pale pupil-less eyes, a maw full of razor sharp teeth and a somewhat beaked snout. It also has two small spikes/horns on its head. Like the Galala Gator, it has six muscular legs, although its legs seem to be thinner and its elbows seem to have a spiky shape. 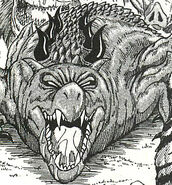 The Devil Crocodile is vicious by nature and will make even the largest beast its prey. The Devil Crocodile is capable of living in many kinds of environments (such as swamps, plains, forests and oceans) without difficulty. It has been known to cross the seas and prey on the Galala Gator of Baron Isle.

It exceeds the Galala Gator in size and rivals the Devil Serpent in strength. It has incredibly powerful jaws that can unleash eight tons of force to bite prey into pieces, thus allowing it to often succeed in its hunts.

The hide of the Devil Crocodile is very valuable and is likely used to make many kinds of high-quality leather products. Just 1 square meter of its hide can be sold for 4 million yen.

The meat of the Devil Croc appears to be quite valuable and delicious as just one kilogram of its meat can be sold for around 120,000 yen.

When Toriko and Rin are lost in the White Forest on the 1st Biotope, they are ambushed by a large herd of beasts, which includs a Devil Crocodile alongside a Zebra Kong and a Purple Horn. They are able to avoid fighting them though thanks to Rin using her Battle Fragrance on Toriko, enhancing the power of his Intimidation greatly and thus scaring them into fleeing.

When the Four Heavenly Kings are searching for the final ingredient in Ichiryu's Full Course Menu at the 1st Biotope, Toriko uses his heightened sense of smell to trace all the beings that were ever present within the 1st Biotope, in order to find Ichiryu's old scent and follow it to the ingredient's location. Among the countless scents he picks up, he detects the scent of a Devil Crocodile which had passed by recently. It is unknown if Devil Crocodiles survived the onslaught of the Meteor Spice that destroyed most of the Human World's resources, as it is never stated when it left its scent in that area.

The Devil Crocodile, along with the Zebra Kong and Purple Horn were omitted from the anime's adaptation of the Regal Mammoth Arc.