The Devil Serpent (デビル大蛇 (オロチ), Debiru Orochi) is a giant, three-eyed serpent with a fearsome reputation. It is said that the strength of the species varies with the individual, making it a very unpredictable opponent. The strongest Devil Serpents have power on par with the Eight Kings, the legendary and most powerful beasts in the world. Many legends speak of the Devil Serpent's particular rivalry with the legendary Battle Wolf, but weaker Devil Serpents from the Human World are nowhere near as strong as a Battle Wolf.[1]

The Devil Serpent is a long purple serpentine creature with an impressive body length, ranging usually between 35 to 40 meters long. It has a dark purple hide and a large white mane made up of hair-like tendrils that it can move about like tentacles. It has four legs (each with six digits & red claws) that can stretch to great lengths and regenerate if they should be severed. It can also grow more arms if needed. It has a fearsome looking maw filled with sharp, blood-colored teeth and three bloodshot stalked eyes that give it excellent vision and a ferocious appearance.

The Devil Serpent is a vicious and ruthless predator that takes on any foe that comes its way and will use whatever tactic or ability it has at its disposal to ensure victory.[2] Also a ferocious hunter that will mercilessly attack and devour all in its way. When exposed to Battle Fragrance, more so than other beasts, it completely rages out of control, however, this heavily affects its judgement, as it might even attack foes that vastly outpower it.[3]

The Devil Serpent has a variety of powerful attacks: vomiting digestive acid, rapidly extending its clawed arms,[4] and poisoning (with a lethal poison composed of over one hundred different proteins)[5] all among them. The poison from from a purebred Devil Serpent can dissolve the arm of Acacia.[6]

Defensively, the serpent can rapidly regenerate,[7] and can compress its heavily muscled body in such a way as to harden lengths of itself against attacks.[8] It can even take its regeneration furthering by generating extra supernumerary limbs. Its head hides many pit organs, allowing it to detect prey even in the dark by sensing body heat.[9]

Despite most Human World Devil Serpents having Capture Levels in the 20s, they can grow to become incredibly strong. A few are even capable of becoming strong enough to challenge members of the Eight Kings.

The meat of the Devil Serpent is normally rather plain, but those that spend a large amount of their lives within caves will store up fat within their bodies, increasing the meat's savoriness. In this case it is a delicious delicacy with several times the flavor and nutrition of beef. Moreover, if sautéed lightly, its bullion sizzles. It can also be made into a delicious hamburger patty that keeps all its nutrition and delicious flavor well packed. When sandwiched together with Mineral Cheese and Neotomato, it creates an outstanding burger with a very high nutritional value. Over 100 grams of its meat can fetch a price of over 150,000 yen.[10]

Five-hundred years ago, a young Midora injured his leg attempting to fight a Devil Serpent. Acacia stated that the largest class of Devil Serpent has strength equal to the Eight Kings.[11]

After Toriko, Coco, and Komatsu make their way into the Labyrinthine Cave to locate the elusive Puffer Whale, Komatsu is kidnapped by a Bishokuya Bandit to be used as live bait in case of an encounter with a Devil Serpent. Toriko and Coco try to search for him, but before they realize it, they are ambushed by a bloodthirsty Devil Serpent, who releases an ear-piercing cry that shatters the entrance into the cave, sealing them all inside and ensuring the entrapment of its prey.[12] A lengthy and difficult battle soon ensues between the Devil Serpent and the two Heavenly Kings who are at a major disadvantage: Toriko being unable to see in the dark and Coco having to hold back on his poison on request from Toriko, who wants the Devil Serpent to remain edible upon its defeat.

The Devil Serpent proves to be a fast and strong opponent, capable of taking advantage of its dark surroundings to get an upper hand several times. This, along with its ability to spit corrosive acid and regenerate severed limbs, makes it a formidable opponent. Running distraction while Toriko gathers his strength, Coco uses Poison Rifle to cover up the Devil Serpent's pit organs, but despite the attack's success, the serpent catches Coco and reveals additional pit organs. It vomits on Coco who survives with Poison Membrane, so it stabs with Coco its hair and begins injecting its poison into him.

Coco easily analyzes the Devil Serpent's unique poison and quickly produces anti-bodies for it. Coco's own poison, which he had used to block the serpent's pit organs, begins to take effect and paralyzes the serpent. Seeing the shadow of death looming over it, Coco knows its time has come, and tells Toriko to strike. Toriko, having been preparing a 5-Hit Nail Punch, releases the full force of his attack on the serpent, which bursts apart. They harvest its meat and go on to look for Komatsu.[13]

Meanwhile, Komatsu and his kidnapper have a fierce encounter of their own with a large Devil Serpent. In a desperate attempt, the bandit throws Komatsu towards the Devil Serpent to keep it distracted but to no avail, and the serpent grabs the bandit and consumes him. Surrounded by several hungry beasts, Komatsu uses the Toriko Cracker given to him by Toriko, hoping to scare them off, but it backfires, disrupts his heartbeat, and bursts his eardrums. The Devil Serpent tries to eat Komatsu but is stopped by the sudden arrival of Knocking Master Jiro, who easily subdues the beast and revives Komatsu. Toriko and Coco soon find Komatsu and the knocked out Devil Serpent.[14] After the events in the cave are over, Toriko uses the Devil Serpent's meat to make himself a delicious burger.

After Rin accidentally sprays Battle Fragrance on one of the Gourmet Coliseum's Devil Serpents,[15] it goes on a rampage and makes it into the coliseum where it easily kills and eats a Gerold, a Growlrus, an Elephantsaurus, and a Silverback all in an instant.[16] Toriko tries to subdue the Devil Serpent, but its drugged-out rage proves to be difficult to handle. Eventually, it blindly sets its sights on the cloned Battle Wolf and her pup. However, this would be its undoing, as the Battle Wolf quickly bites off the serpent's arms at unbelievable speeds and then instantly shreds half of the Devil Serpent's body into nothingness.[17]

In the video game series, the Devil Serpent is shown to have a variety of different subspecies:

In the anime, a subspecies of Devil Serpent with a darker skin color and a higher capture difficulty level called Demon Devil Serpent appeared, during Komatsu's separation from Toriko whilst in the Labyrinthine Cave, and during the Gourmet Coliseum fight with the Battle Wolf. Both events in the manga only had regular Devil Serpents and it was never stated in the manga that these two Devil Serpents were of a different subspecies.

The Devil Serpent makes a cameo appearance in the ending credits of Toriko 3D Movie: Kaimaku! Gourmet Adventure!!, preparing to face off with Toriko and Coco.

The Devil Serpent appears as a boss in the PSP game Toriko: Gourmet Survival, appearing later in the game. It resides in the cheese-caverns portion of Megamori Island and can be fought by either Toriko, Coco, or Sunny.

The Devil Serpent appears once again as a boss in the PSP sequel, Toriko: Gourmet Survival 2, appearing early on within the Gattsuki Continent.

The Devil Serpent appears in the Nintendo 3DS game Toriko: Gourmet Monsters. It is one of the many tamable enemy beasts in the game which the player can tame for coliseum battles.

The Devil Serpent has been featured prominently in merchandise, having been featured in a line of miniature figurines, keychains and trading cards, and also having appeared in every single Toriko video game to date. It is also part of the "Monster Capture" collection, which consists of larger scale figures of 5 beasts from the series fighting the Four Heavenly Kings, made up of it, the Gerold, the Obsaurus, the Tundra Dragon and the Parasite Emperor. 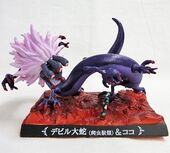 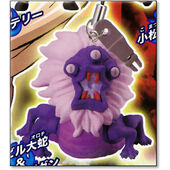 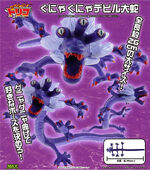 sticker
Add a photo to this gallery