Disappearing Cuisine (雲隠れ割烹, Kumogakure Kappō) is a 10-star restaurant famous for its disappearing building located in the Lost Forest. It is owned and run by chef Chiru, one of the top 100 chefs in the world. Prior to Chiru becoming its head chef, the restaurant was managed by chef Chiyo, one of the top 5 chefs in the world before she joined the Gourmet Corp.. The restaurant apparently has the highest levels of Food Etiquette; this means that the food used in this restaurant becomes inedible if the customers do not respect the etiquette. Some of the foods here are so difficult to eat that absolutely no one can eat most of them without at least training in the basics of Food Honor.

The restaurant is made from Ongyoujyu Tree wood so if the customers do not show their thankfulness (gratitude) by pressing their hands together and bow, the restaurant disappears from their sights to make them think they are in the forest.

When Komatsu completed his training in Food Honor, he was able to make all the ingredients in the restaurant easy to eat without the need of Food Honor. Back when Chiyo was the chef, Bubble Fruits were served here, but it was taken off menu when she left as Chiru lacked the ability to cook them before Komatsu helped her; however, after Komatsu's simplification they were likely added to the menu again.

After the fall of the Meteor Spice caused a heavy loss of resources for the Human World, all restaurants (including Disappearing Cuisine) were forced to serve Food Tablets until the food crisis could be resolved. After the successful revival of the Billion Birds and their mass distribution, Disappearing Cuisine was able to serve real food on its menu once again. The existence of the Billion Bird left chef Chiru astonished due to its ability to be produced infinitely. 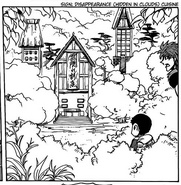 Komatsu cooking in the restaurant
Add a photo to this gallery