Drunker (ドランカー, Dorankā) was a Gourmet Hunter and the Eating Champion of the Southern Islands. He was one of the many hunters that traveled to Ice Hell to find the Century Soup for Colonel Mokkoi.

He was overweight and had dreadlocks. He had a tattoo on each of his upper arms and appears to have had face paint on his eyes. Drunker was usually seen wearing a black tank-top and olive-colored pants.

He had a voracious appetite. He did have some humility, when he refused having an eating contest with Toriko, because he knew he would lose.

He was seen using a large black axe on a Grand Shark. In the anime, he used a flail on a Sharkcrocodile. Neither of them, however, was effective. Bogie Woods used his body to kill multiple Gourmet SP, and was only matched by one, but Bogie still considered him weak.

Drunker's first appearance is at the Bar Heavy Lodge where he is seen celebrating after winning an eating competition. He was one of the many hunters who are shocked to see Toriko enter the bar. Drunker, despite having an enormous appetite, exclaims that even he wouldn't be able to win against Toriko in an eating competition. He is one of the many hunters who travel to Ice Hell in order to find the Century Soup for Colonel Mokkoi. Inside the ship he is killed by Bogie Woods who then lodges into Drunker's body, and proceeds to attack a group of Gourmet SP. Realizing Drunker's body is too weak, he lodges the body of a Gourmet SP and leaves Drunker's corpse behind which is later discovered by Teppei.

Drunker's weapon in the manga 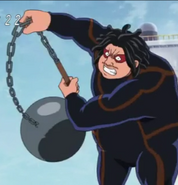 Drunker's weapon in the anime