This article pertains to the dessert in Acacia's menu. For the planet of the same name, see Earth.

EARTH (アース, Āsu) is the dessert dish in Acacia's Full Course Menu. EARTH, like all of Acacia's ingredients is located in the Gourmet World, specifically in Area 4's Gourmet Garden. It is currently in Sunny of the Four Heavenly Kings Full Course.

EARTH ripens from the flower bed of Gourmet Garden into a magnificent pink and gold dessert, that appears as soft ice cream.

Consuming EARTH fully awakens the Gourmet Cells of the right leg.[1] It is said to have unmatched sweetness and to provide so much energy and nutrients that it perfectly counters the exhaustion of generating Back Channels, NEWS' gift.[2]

It has almost been completely revived by Yosaku, requiring one more month to restore it completely.

Yosaku and Manan are sent to Sector G, Gourmet Garden by Ichiryu's orders to revive EARTH. But are stopped by Kaitora, Mamymaron, Faram, and some Nitros stand in their way. Manan then watches as Yosaku says he would like to ask Kaitora something only he knows.[3]

When the Four Heavenly Kings and their allies arrived in Area 6, they were divided into teams to seek out each of Acacia's ingredients at a faster rate. Sunny and Livebearer were teamed up by Jiji to seek out and capure EARTH in Gourmet Garden.

After a piece of Neo distracted the Snake King, Sunny and Livebearer were able to retrieve the fruit, which Yosaku had fully revived, and gave some to Area 4's civilization. Sunny and Livebearer return through the Den of the Old and encounter Komatsu and the others. The fruit is placed next to NEWS within Yun's Back Channel, and pieces are given to the Ten-Shell Five who are maintaining the expanded Back Channel. After the group reaches Area 3 and collect ATOM, they split up the Full Course items and carry them to the Human World, Gourmet Corp., and Area 2.[4]

In Area The Four Heavenly Kings, Komatsu, Starjun, and Aimaru eat the Dessert Dish Together.[5] Afterwards, Sunny announces to Toriko and everyone else that his full course menu is finally complete after obtaining EARTH. 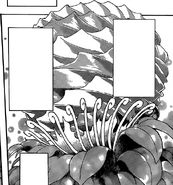 The source of EARTH's sweetness is the Earth itself 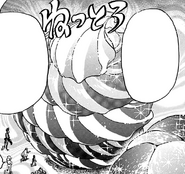 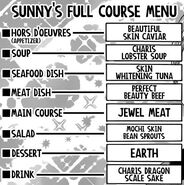