The Eight-Tailed Scorpion (ヤマタノサソリ, Yamata no Sasori) is a giant poisonous arthropod with eight long tails that was used as a living weapon by the warring nations within Sand Garden until they formed a peace pact due to Zebra's release.

It is a giant purple-shelled scorpion arthropod with a body length of 15 meters and weight of 12 tons. It has gleaming red eyes, a gray lower jaw, two large pincers and a spiked growth growing from its head. Its most notable feature is its eight large tails which can extend to a great reach and its grotesque stingers can pierce almost anything with their sharpness and release several types of very deadly poison. Despite being called a scorpion, it is actually a crustacean rather than an arachnid.

As a "Level Two Dangerous Creature", it is a mindless killer by nature, killing and attacking all prey in its path no matter what their strength is and laying waste to everything in its path. It was these attributes that made it an excellent living weapons for the war.

Each of its tails contains a different type of poison, which makes the chance of receiving the correct antidote after being stung quite low. It can kill almost any type of creature with the poisons that comes out of its eight tails which can also extend and retract at will and attack at great speeds with, and it has a natural ability for greatly messing up ecosystems. For these reasons, it is used as an artificially bred weapon in military operations. It is a "Quarantine Designated Creature" and "A Level 2 Dangerous Creature" within Sand Garden due to its highly deadly poisons and penchant for destroying ecosystems.

Capturing it for consumption is highly dangerous, but the flesh beneath its tough outer shell is rather tasty and the meat from its tails (when properly detoxified) is said to be even more delicious. According to Zebra, it goes great with alcohol.

Eight-Tailed Scorpions were commonly used as Living Weapons during the war in Sand Garden, but after Zebra is released from Honey Prison, the warring factions feared his might and decided to form a truce in hopes of surviving a possible disaster with Zebra. Even though the war ended, a single Eight-Tailed Scorpion is still left to roam free and it laid waste to all that stood in its path and destroyed countless villages and killed many beasts and people, many of which appeared to be children and their parents. After Toriko, Zebra, and Komatsu arrive in Sand Garden, they come across a small village that had been nearly destroyed by the Eight-Tailed Scorpion. After they hear of the creature from an elderly villager, the creature makes its appearance and prepares to attack once more, this time making a little girl its prey. Zebra having seen this creature as "too cocky" unleashes a deadly attack which cuts down the creature into unrecognizable pieces, putting an end to the village's suffering once and for all. 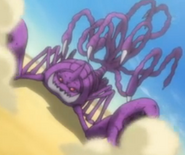