This article is about the restaurant, for the orphanage see Fairy Tale Castle (Orphanage).

The Fairy Tale Castle (オトギの城, Otogi no Shiro) is a 7-star restaurant that was owned by Otake, Komatsu's old friend and fellow chef. It specialized in Fairy Tale cooking which comprised of all sorts of fantastic and whimsical-looking food. The building itself and its interior also had a fantasy-like theme, bearing resemblance to a magic castle.

It is unknown what became of the restaurant after Otake was kidnapped by a GT Robo and joined the Gourmet Corp..

After Otake had finished his apprenticeship, he opened up his first restaurant, however the restaurant proved unpopular when a famed food critic gave him a bad review. Sometime after this, the orphanage where Otake grew up in suffered a great tragedy when all its residents died from severe food poisoning. The event would inspire him to remake a new restaurant dedicated to the deceased orphans and he named it "Fairy Tale Castle", after the orphanage itself hoping to make it a place that would be beloved by children and allow him to one day open his own orphanage where children could eat high-class ingredients whenever they wanted.

True to its nature as a restaurant that would be beloved by children, the restaurant resembles a castle with a fantasy-like interior that is bright and colorful and filled with mushroom-like furniture. The restaurant itself specializes in "Fairy Tale Cooking" and as such mainly serves dishes that have a whimsical and magical look to them. Fearing that the restaurant would meet the same fate as his old one, Otake chose to bribe potential critics and think little of customers to ensure that his restaurant would achieve a high status, and his methods proved successful, however at the top of his fame he would end up being kidnapped by the Gourmet Corp. which left Fairy Tale Castle without its owner and head chef.

After returning from the Gourmet World, Otake reopened his restaurant and turned into an orphanage, too. With the help of IGO and Saiseiya, Otake can cultivate and serve GOD.[1] 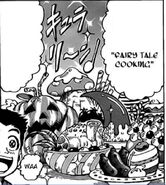 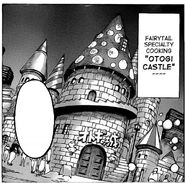 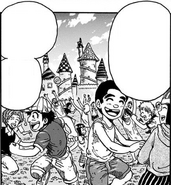 Fairy Tale Cooking (Anime)
Add a photo to this gallery