The Fall Tree is a large tree that constantly releases water from its leaves, making it look as though it is always raining underneath it.

The Fall Tree contains large amounts of water which its leaves can shoot out like water missiles and down on to prey to crush and drown it with the sheer force and speed of the water, turning the prey into a crushed absorbable pulp, then, using its roots, the tree saps the prey's nutrients. The water missiles are so abundant and powerful that it feels like being under a mighty waterfall. Despite appearing to be a simple tree, it is actually a plant beast that prefers to remain stationary due to being unable to move from where it is rooted and thus avoids active aggression, preferring to await for its prey to come to it before bombarding it with its water.

The Reality of Gourmet World ArcEdit

After Toriko first entered the Gourmet World and landed in the Underground Forest, he was immediately assaulted by its fearsome inhabitants, then attacked by force of the Heat Planet, and then shot by deadly cacti into the habitat of the Fall Tree, which then began to crush Toriko with its heavy rain, with him barely able to escape from it. Luckily he was able to pry himself out but only to find himself in the territory of some ferocious Mamews. 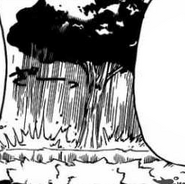 Fall Tree (manga)
Add a photo to this gallery