Faucet Cactus (蛇口サボテン, Jaguchi Saboten) is a poisonous and carnivorous plant that lives in deserts.

A carnivorous plant that entices thirsty animals in the hot desert to come drink its poisonous water. This then kills them so that the Faucet Cactus can absorb the nutrients from their corpses. Despite it appearing to be a simple cactus, it is actually classified as a plant beast, however the Faucet Cactus is not aggressive because it cannot move from where it is rooted, and it won't harm anyone as long as they steer clear of its water. However, the need for water in the sweltering desert is so great that fighting off the urge to drink from it is more difficult than fighting off a ferocious monster and once dead the Faucet Cactus will quickly take the nutrients from its victim's body.

While traveling through Sand Garden, Komatsu notices the cactus and quickly goes to it. He is surprised it has a faucet and wants to get water from it and for the camels to drink, too. Toriko stops him and tells him to look around him. Komatsu notices multiple bones of dead animals. Toriko tells him that the Faucet Cactus is a plant that lures thirsty animals, poisons them, and, after they die, absorbs the nutrients from their corpses to grow. 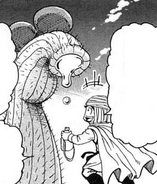 Komatsu wanting to fill water from the Faucet Cactus

The bones of the dead animals from the Faucet Cactus