The Gerold is an avian terror sporting five heads and a savage disposition that has earned it the nickname "Reaper of the Skies". 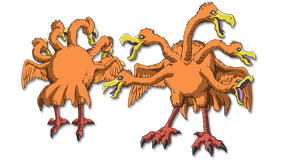 The Gerold is a massive orange bird beast whose most notable trait are its five heads as well as its uniquely shaped body with both rotund and lean characteristics. It can grow to have a height of 8.7 meters, a body length of 13 meters and a weight of 5.6 tons upon reaching adulthood. It has very long and lean legs capable of easily supporting its weight as well as a pair of moderately sized wings that are fully capable of flight and maintaining its body in the air for extended periods of time. Its rather rotund frame is due to the large amount of fat it stores within its body in order to withstand the cold temperatures within the mountains it calls home.

Each of its five heads can act independently of one another but at the same time work well together to subdue prey. Each of the heads share a voracious appetite and lust for the hunt and will take down any potential prey that catches their eyes. Gerolds appear to be quite intelligent, capable of devising complex methods to take down prey and enemies alike. They primarily prefer to make their nests in mountainous regions with either warm or cold climates, however they can survive in captivity as well and some are known to be kept in the IGO's 1st Biotope. Gerolds do not normally enter human settlements unless driven out of their habitats by a stronger predator, such as a Mammoth Bear.

Each of the five heads is completely autonomous, so it is capable of pecking out an enemy's eyes with one sharp beak while using its long neck to wrap around another enemy at the same time. When attacked, it can use its wings to escape into the skies, jabbing and dodging all the while. With such a savage and tactical nature, it is no wonder this formidable warrior beast is famed in Gourmet Coliseum circles. A Gerold's strength tends to vary, but the usual minimum capture level for a weaker Gerold is 6 while the max capture level for a strong Gerold is 15.[1] This beast is also capable of surviving in cold environments with low oxygen due to the thick layer of fat it stores in its body and as such is capable of making its home high up on cold mountains.

Due to its feral and calculating nature, the Gerold is a popular fighting beast within the animal fighting circles such as those held within the Gourmet Coliseum, as its brutal disposition and tactics always manage to create a must-see spectacle of raw animal brutality.

Its meat appears to be quite the delicacy and can be either grilled or made into kebabs. Due to its high fat content it is also rich and flavor. Just 1 kilogram of its meat can fetch a market price of around 120,000 yen.

A Gerold, along with a Silverback, a Growlrus and an Elephantsaurus were used in a Gourmet Coliseum match against a Battle Wolf. As the beasts attacked the Battle Wolf, Toriko broke through the coliseum's dome to protect it. However the now compromised dome allowed the Gerold to escape and attack the audience, luckily Mansam used his "Fry Punch" to incapacitate the beast. Later the Gerold and the other beasts were killed by a drugged out Devil Serpent which had accidentally been sprayed with Battle Fragrance by Rin a few moments earlier.

The Gerold originally appeared in the second pilot chapter of Toriko where it was a vicious beast threatening the simple village of Teran Plains. A young man named Komatsu went in search of the famous Gourmet Hunter, Toriko in hopes of having him kill the Gerold, however Toriko soon finds out that the Gerold is not the true menace but rather a Mammoth Bear which has driven out the Gerold and several other beasts from their native habitats. The duo are eventually confronted by the Gerold, but Toriko's Animal Partner, Terry Cloth attacks it to allow Toriko to seek out the Mammoth Bear without delay. Eventually the Gerold is killed by Terry and its meat was later given to Komatsu and the denizens of Teran Plains.

Notably, the Gerold was originally depicted as having three heads in the pilot before it was redesigned into having five heads in its manga debut.

Gerolds appear as enemies that can be hunted for ingredients. They also have two new subspecies, the "Gerold subspecies" (ゲロルド亜種, Gerorudo ashu) which is completely blue in color, and the "Monster Chicken Gerold" (怪鶏ゲロルド, Kainiwatori Gerorudo) which is a white Gerold with chicken-like heads.

Retrieved from "https://toriko.fandom.com/wiki/Gerold?oldid=136944"
Community content is available under CC-BY-SA unless otherwise noted.