Gido (ギド, Gido) was a Gourmet Corp. subordinate and was one of the main antagonists of the Regal Mammoth Arc. He is never actually seen in person as throughout the story he is piloting a GT Robo and only his voice is heard. In truth his loyalty did not lie with the Gourmet Corp. and was actually a spy placed in the organization by NEO.

As mentioned above, he is never seen in person so his true appearance is mostly unknown. However he is seen wearing a GT Robo operator's suit and judging from that, it is clear that he is a tall, muscular man with a well built frame and apparently does not have long hair, as Stajyun's hair is easily seen coming out of his operator's suit.

His GT Robo is a Giant Model covered in chains and has pink "hair" all over its body. 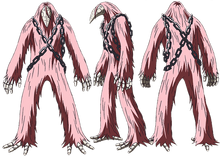 Gido was a vain and callous individual who was extremely vain and independent, preferring to work alone and gain the credit and recognition of his higher-ups at the cost of making his teammates look bad and sabotaging them. He also had a very high ego and was very overconfident, not believing for a second that he could've lost to Coco.

Not much is known of Gido's natural abilities but he appears to have been quite skilled in the usage of the "Giant Type" GT Robo and is the only Gourmet Corp. member at the time who could handle controlling it. The GT Robo is also quite durable to the intense poisons of the Poison Tide[1] and other corrosive elements thanks to its highly resistant titanium alloy body and could even survive against high gas concentrations. However, in the end, it is no match for Coco's unique and highly dangerous poison techniques which enter its body and damage its core antenna.

The following techniques are all performed by Gido with the usage of his GT Robo.

Gido was originally a member of NEO, an organization led by the "Dark Chef" Joie, and had been sent into the Gourmet Corp. as a spy sometime ago. However, it is unknown if Gido was a willing member of NEO or a brainwashed victim of Joie's Taste Change.

Gido is first seen encountering Zaiper's damaged GT Robo after the latter was crushed by the Regal Mammoth. Zaiper requests for his help but Gido instead crushes the GT Robo to ensure that he would get all the credit for the Regal Mammoth's capture, leaving an angered Zaiper behind.[3]

After finding the Regal Mammoth he discovers it is quite difficult for him to capture, but after it runs off the edge of the cliff and is paralyzed by the poison of Coco of the Four Heavenly Kings, Gido proceeds to capture it and obtain the Jewel Meat but is stopped by Coco who could sense a death omen coming from Gido, implying that he will die very soon. Gido laughs this off and engages the poison user in battle. He is eventually defeated by Coco, and his GT Robo is collected by Mansam and Shigematsu. Based on Grinpatch's comment to Toriko, Gido is presumably killed by Starjun during his rampage in the 6th Branch over the failure to capture the Regal Mammoth, fulfilling Coco's prediction of his death.[4]

During the events of Cooking Fest, Starjun confirms that Gido had indeed been killed, but not just due to his failure but due to having been discovered as a NEO spy, something that Starjun tells Joie upon their meeting in Cooking Stadium.