The Goblin Plant (ゴブリンプラント, Goburinpuranto) is an enormous, semi-sentient Plant Beast that lives deep within the Wul Jungle of the Northern Wul Continent.

It is a large and grotesque plant beast with a fearsome presence. The entirety of its body is made of wooden roots and branches interconnecting and crisscrossing with one another giving it a very peculiar and random body shape. It has white hair, blue gem-like eyes, sharp teeth and its body is mostly light green in color.

In the anime it lacks hair, has smaller eyes, has a darker green color and the tip of its branches and its face are pale yellow in color.

Capable of regeneration through growth, as well as the ability to 'move' using its own unique system of aerial roots, it captures other beasts using its adhesive branches, draining them of their nutrients until they're reduced to bones and dust. Its phenomenal speed of growth allows it to produce new branches and roots in an instant, allowing it to nearly keep up with Terry Cloth in battle. Taking bites out of a Goblin Plant's funky trunk won't inflict that much damage on it. In fact, it'll only make new roots spring forth. Rather than attack it head-on, it is more effective to barrage it with firearms from a distance. It is also incapable of dying, even if burned down, in which case bacteria will break up its burnt ashes and absorb its nutrients, allowing it to grow again.

While no part of the Goblinplant's body is edible and has absolutely no use as food, its emerald-green eyes are considered jewels of the highest class and can sell for at least 1 billion yen each.

As Toriko and Terry journey through the Wul Jungle, Toriko is attacked by one, but Terry saves him and takes his place, hostage in the plant's trunks.[1] After Toriko gets angry at Terry for getting in the way, Terry breaks free and starts brawling with the plant, cutting trunks one after another. The beast is keeping up with Terry, until Terry gets serious and, by jumping all around at a high speed, cuts open the Sakabaloon Fruits on the trees near the beast, showering it with alcohol. Then, using its fangs at full force, Terry lights a spark from the plant's trunk. The plant swallows the exhausted Terry, but the fire causes the plant to spit Terry out.[2]

In the anime this creature was renamed Zombie Wood and its overall appearance was altered to have a less random body shape, no hair, smaller eyes, and a darker color scheme, however its abilities, behavior, capture level and role in the story remained unchanged.

The Goblinplant has been featured in the miniature figurine toy line as a collectible figure. 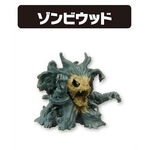 Retrieved from "https://toriko.fandom.com/wiki/Goblinplant?oldid=142672"
Community content is available under CC-BY-SA unless otherwise noted.