The Gourmet Jellyfish is a unique species of jellyfish that lives in the deepest regions of the ocean. A long time ago, the jellyfish was originally believed by humans to have been the origin of Gourmet Cells before the discovery of the Bedrock Mineral.

Gourmet Jellyfishes are small creatures about half the size of a tall human. They emit a bright golden glow from their bodies and their tentacles also glow with a vibrant white color. Its oral arms are leaf-like and yellow in color while its bell is a dark yellow color with an orange interior.

The exact behavior of these creatures is uncertain, however they appear to be indifferent to their surroundings, even if they are eaten as they can quickly recover from any damage. They primarily reside in the deepest regions of the sea.

Gourmet Jellyfish have strong regenerative properties and can instantly regenerate lost tissue if a part of their body is damaged or eaten. This is due to their high level of Gourmet Cells, and any beast that consumes a Gourmet Jellyfish will find themselves strengthened and enhanced greatly by consuming one of these jellyfish.

Their abundance of Gourmet Cells originally led Acacia to believe that these jellyfish were the origin of the Gourmet Cells, but in truth the source of the cells is far more ancient and as such how they came to posses such a high number of cells is uncertain.

Heavenly King, Coco has theorized that these creatures close proximity to the Earth's center (where Bedrock Minerals are abundant) may be the cause of their abundance of Gourmet Cells.

It is unknown if Gourmet Jellyfish can be eaten as they are by humans, however beasts have been shown to be able to eat these jellyfish alive while gaining great physical and flavorful enhancements.

Long ago, the legendary Gourmet Hunter, Acacia discovered miraculous cells within this jellyfish and dubbed them Gourmet Cells. The name was chosen when Acacia noticed that creatures who ate Gourmet Jellyfishes would increase in flavor and would also grow in size and power; additionally, the more high-quality foods those creatures subsequently consumed, the stronger the regenerative properties and life processes of their Gourmet Cells.

After Acacia presented his research to the world and used it to enhance the world's food supply, the infamous Gourmet War broke out over this new discovery. When Acacia was able to cease the war by serving the holy ingredient "GOD" to all of the world's influential people, peace talks began and what would become the IGO would eventually be founded which would focus on the study of cells and its usage in food production.

Both the IGO and other legal (and illegal) organizations have been researching Gourmet Cells for centuries, but the results of said research are shrouded in mystery. However it appears that acquiring Cells is no longer limited to needing a Gourmet Jellyfish, as now most high-class foods are abundant in Gourmet Cells, and there are many other legal and illegal methods of acquiring them. 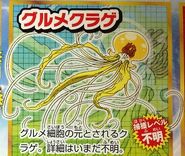 Gourmet Jellyfish Sticker from ver.3
Add a photo to this gallery
Retrieved from "https://toriko.fandom.com/wiki/Gourmet_Jellyfish?oldid=144921"
Community content is available under CC-BY-SA unless otherwise noted.