The Gourmet Pyramid (グルメピラミッド, Gurume Piramiddo) is a gigantic pyramid located in the Desert Labyrinth, part of the Sand Garden. In actuality it is the tip of the tallest tower of an immense castle beneath the sand. It is one of the Seven Gourmet Wonders, said to be filled with puzzles no-one has been able to solve, and is the location of Mellow Cola.

Every creature within the Gourmet Pyramid is a Special Preparation Ingredient.

According to the locals of Sand Garden, it took thousands and thousands of years to build, which is impossible for any human civilizations with their construction ability. They believe it was built by a super civilization or beings from another world. The purpose of the massive structure and the one who built it has yet to be revealed, nor has it been revealed how the entire structure sunk beneath the sand. According to Toriko, the stone has the smell of phosphoric acid and others that he has never smelled before, as it was made from outside the Human World.

While traveling, the King Octopus Kong demolishes the pyramid upon entering the Human World.[1] Luckily only the outside structure is damaged and the interior of the overall palace remains intact.[2] 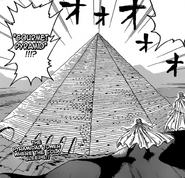