The Harbor of Evil Spirits (悪霊たちの港, Harbor of Evil Spirits) is a mysterious sea filled with dark ominous fog and countless wrecked ships that is located near the shore of Yutou Island and it is one of the only three land routes in the Human World that leads into the treacherous Gourmet World.

All ships that have attempted to enter the Gourmet World through this treacherous sea have swiftly met their end within. The environment within the foggy harbor is truly otherworldly and ominous, resembling a haunted ship graveyard or underworld filled with all manner of wreckage, dead bodies and skeletons which not only float among the waves but even in the air as though suspended by an unknown force. The environment within is never fully explained and it is unknown how much or if any of it is influenced by the Real Mist of Yutou Island or some other mysterious force. The ships that float in the air and in the sea still hold the skeletons of its passengers which still stand as though they were alive, seemingly "waving" at newcomers who attempt to brave through the harbor, and it is because of these haunted corpses that the harbor is considered a home of evil spirits. 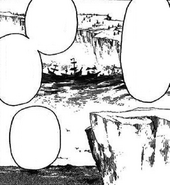