The Hayanpanther (ハイアンパンサー, Haianpansā) is a rare breed of giant winged panthers of near-unparalleled speed. The poster child of this species, Rikky, serves as Mansam's animal partner and was bred in the IGO's Gourmet Research Laboratory.

Hayanpanthers appear to be tamable, although it is not entirely certain how easy such a feat is. According to Mansam, Rikky saved his life when they first met, indicating that Hayanpanthers may defend wounded creatures in need of aid. However again it is unknown if this is common to most members of this species or just Rikky. On a different note, Rikky's favorite food is the fatty Horohoro Parfait, and he always looks forward to Mansam rewarding him with one.

Hayanpanthers boast superior alertness and agility particular to big cats, and their speed is said to exceed that of any other mammal's (putting it up there with the Battle Wolf). The wings on their back enable them to fly short distances, and also aid in cutting down wind resistance when they are running. 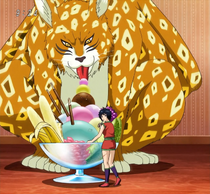 Rikky a young Hayanpanther in comparison to Rin

Community content is available under CC-BY-SA unless otherwise noted.
Advertisement