The Human World (人間界 Ningen-kai) is the name given to the region that makes up only 30% of the Earth's surface and it is where the Human race resides. The other 70% is known as the Gourmet World, a vast and dangerous realm where no regular human would dare tread. The Human World also has a population of around 31.2 billion people.

The Human World suffered catastrophic losses and severe change after being attacked by the Gourmet Corp. Boss Midora, who unleashed a horrific attack dubbed Meteor Spice upon the Human World, resulting in severe environmental and economic losses and turning over 80% of the Human population into victims (luckily the loss of Human life was kept to a minimum). Nonetheless, this basically resulted in a brief end to the Gourmet Age which brought about a depression that would last for a year and a half. However the famine was eased singlehandedly due to the efforts of Toriko and Komatsu, the former who literally rained down a Rain of Food across the entirety of the Human World and the Gourmet Age was soon after restored after the mass circulation of the revived Billion Bird ensured a stable distribution of food for all, which has given Saiseiyas the opportunity and the resources to begin reviving many of the lost resources and lifeforms of the Human World. 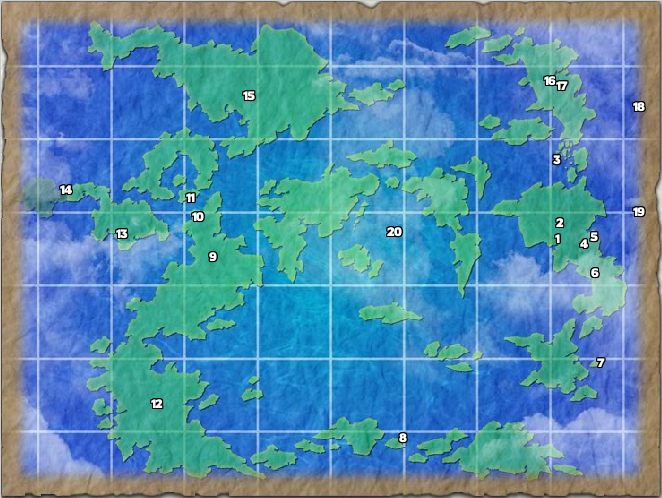 The Human World's countries and culture are somewhat similar to those of Earth in terms of society and structure, however the world completely revolves around food, with cities and countries having mostly restaurants and rare Ingredients as their primary source of income and even food-themed architecture is quite prevalent, with the most notable food-themed city being Gourmet Town, which is the largest city in the Human World. It appears that the people of the Human World primarily use a mixture of the real world English and Japanese language or both as their standard written language, which is evident in their documents and signs; their culture and architecture is also much like modern western society in the real world but with some obvious oriental influences.

Food is viewed as important and sacred in human religions and philosophies, with even temples established for the worship of food and for revering the "Gourmet God" Acacia.

After the fall of the Meteor Spice, many countries received serious damage and many of the once great gourmet-themed landmarks and cities have fallen to rubble, including Gourmet Town the once glorious symbol of the Gourmet Age. Luckily, with the revival and distribution of the Billion Bird, and the following slow revival of resources by the saiseiyas, the Gourmet Age's former cultural glory is slowly being restored.

In the Human World, the main form of currency is mainly referred to as "Yen" (the name of Japanese currency in the real world) and functions much like real yen does. The only difference is that all currency has food imprinted on it, such as notes having a picture of "meat on the bone". Almost all gourmet ingredients and related items are incredibly expensive and some are worth more than even the most priceless gems.[1]

After the fall of the Meteor Spice, the Human World suffered severe economic losses that could not even be measured due to the loss of land and resources, creating economic disarray which resulted in an outrageous increase in price of even the most simplest of ingredients. This severe economic depression would last for almost a year and a half.

When the mass distribution of Billion Birds resulted in a stable distribution of ingredients and the reopening of many restaurants and food establishments, economic stability began to be be restored once more. Thus ending the economic depression.

The Human World has numerous monarchs and political figures which reign over different countries in the Human World and most of the countries are part of the United Nations (much like in the real world), however the primary power of the world appears to be the global organization, the IGO. The IGO is mainly responsible for the mass production of most of the world's ingredients, keeping civilians safe from dangerous beasts, and farming rare and dangerous plants and beasts in their Biotopes in order to produce and improve ingredients. Because of their importance to the Gourmet Age, the IGO is viewed highly in the world and appears to hold even more power and influence than the United Nations, having a total of 360 nations as members (far exceeding the United Nations member nations).[2] However not all countries are affiliated with the IGO, a notable example being the crime infested kingdom of Jidal. Countries that are too poor to pay the Gourmet Tax are also unable to become members of the IGO, however the IGO annually offers them a stable supply of ingredients around Christmas.

The Human World also has a strict set of laws known as the "Eight Gourmet Laws" which were designated by the IGO, as such even the theft of food or performing any food-related crime is considered a terrible act, and the punishment for doing so will result in the accused being sent to one of the Three Great Gourmet Prisons.

During the invasion by the Gourmet Corp., many of the IGO directors were murdered by former IGO director Uumen Umeda who along with Vice-President Shigematsu was secretly a member of the sinister organization NEO and President Ichiryuu died after receiving a fatal blow from a Blue Nitro, leaving the organization with serious losses. This only grew worse after the fall of the Meteor Spice which caused great damage to the IGO Headquarters and many countries around the world, leaving governments everywhere in distress as they try to sort out the severe losses worldwide. Eventually, to ensure the continued stability of the IGO, quick action was taken and director Mansam was promoted to the position of president of the IGO while his assistant Rin was made the new director of development, and under their management the IGO was able to remain stable and maintain order until Toriko's return. Upon his return, the IGO was able to begin handing out more resources to saiseiyas to begin their revival projects which thankfully ensured the world's continued faith in the IGO.

While some parts of the Human World's terrain is similar to Earth, there are regions which are extremely dangerous and appear to border on the impossible by our world's standards. Such examples would include the extraordinarily cold and deadly continent of Ice Hell, the massive vegetable garden growing in the clouds known as Vegetable Sky, the nearly bottomless canyon known as Heavy Hole which is known for its intense level of gravity and most notably the numerous locations around the world which are in actuality ingredients themselves, such as the edible Gourmet Deserts of Sand Garden, the carbonated Cola Sea and the frozen and tasty mountain range of Ice Cream Mountain. It should also be noted that the Human World alone (not counting Gourmet World) is vastly larger than Earth, even having continents that are twice the size of Eurasia and these make up only less than 10% of the planet's surface area.

Over time, the Human World's flora and fauna have slowly shifted in terms of Capture Level, this shift is due to the mass number of creatures that originated from the Gourmet World being pushed towards the Human World in order to ensure their survival and escape both the harsh climates and fierce predators of the Gourmet World who have become more dangerous with the approaching "Night" event in which the Eight Kings become more active which spurs the rest of Gourmet World to become more harsh. This change was first notified by Guemon who guards one of the Gourmet World entrances, the Three Way Road, from dangerous beasts that attempt to enter the Human World. This is then again noted by Komatsu just before he, along with the Heavenly Kings riding the Octomelon, enter the Thorn Sea. The first beast they encounter near the Thorn Sea was of a hefty Capture Level of 299, nearing the Four Beast's Capture Level.

After the fall of the Meteor Spice, several of the natural environments within the Human World and the creatures that once dotted the landscape have apparently been annihilated, leaving vast lifeless wastelands where they once were. These environmental losses are only worsened due to the previous attack by the Four Beasts which destroyed many regions and habitats during their attack. This has resulted in severe food shortages unlike any seen since the Gourmet War.

However, upon returning from the Gourmet World, Toriko and Komatsu started to alleviate the famine and devastation with the tremendous bounty that they had caught within the Gourmet World and their subsequent revival of the Billion Bird, which resulted in enough resources for all of humanity. This restoration of a stable food resource also gave the saiseiyas the time and resources needed to begin restoring the land to its former glory.

From Coco's findings after the Meteor Spice incident, it is implied that the Human World is in fact the remnants of a planet that looked similar to real-world Earth (although with somewhat differently shaped continents) which was hit by a meteorite made of a parasitic mineral that was capable of growing by absorbing its surrounding energy.

Coco believes that the meteorite embedded itself in the core of the Earth-like planet and, over several hundred million years, grew out enveloping much of the planet's surface and drastically increasing the size of the planet. The areas covered became the Gourmet World and the original planet became the Human World. This also resulted in an explosion in the variety of creatures and ingredients in the Gourmet World, beginning the new world's Cambrian Period.

All that remained of the original planet is the central area of the Human World whose continents appear to be the same ones the original planet possessed long ago, indicating that this section of the planet was pushed away from the center and forced back on to the new surface of the planet and into its own small section during the planet's formation and growth in which the mass of the meteor began encroaching upon everything. If you look closely at Central Human World, it essentially looks like our Earth with a higher sea level that has been split along the Atlantic Ocean as the Bedrock Material from the meteorite grew larger than the planet itself. However, even Coco himself is not too sure about the validity of this theory and still considers it mostly conjecture on his part.[3]

The Human World attacked by the Meteor Spice

A Map of the Human World (anime)

Full view of the world