The Jabrasnake is a large reptilian snake with a lengthy body and a large quadri-hinged mandibled mouth. It has leathery purple skin with black spots on its back and a gray underbelly. Its mouth is full of sharp yellow teeth and a long pink tongue. It also has two very small black eyes behind its mandibles.

It appears to be an aggressive creature as shown when it tried to fight a Tile Turtle in the Regal Plateau, although it is unknown if this was for food or for territory.

The Jabrasnake is seen battling a Tile Turtle, but their fight is interrupted by Zyper, who shoots both of the beasts using the GT Robo's shoulder guns since he deems them bothersome. He proceeds to attack them with the gun on his arm, but the Jabrasnake survives and tries to attack him. Zyper uses the laser in the GT Robo's head and defeats the Jabrasnake, but moments later, all of them are crushed by the Regal Mammoth.

When the Four Heavenly Kings are searching for the final ingredient in Ichiryu's Full Course Menu at the 1st Biotope, Toriko uses his heightened sense of smell to trace all the beings that were ever present within the 1st Biotope, in order to find Ichiryu's old scent and follow it to the ingredient's location. Among the countless scents he picks up, he also detects the scent of a Jabrasnake which had passed by recently. It is unknown if Jabrasnakes survived the onslaught of the Meteor Spice that destroyed most of the Human World's resources, as it is never stated when it left its scent in that area.[1]

The Jabrasnake itself did not appear during the Toriko Jump Special OVA, however it did make a cameo appearance in the credits "Sono Na wa Toriko" where it was seen chasing after Komatsu in a jungle along with a hoard of other angry-looking beasts.

The Jabrasnake appeared in Toriko: Bakushoku Gourmet Battle as an enemy and obtainable ingredient. 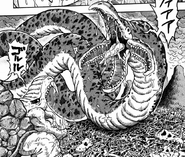 A Jabrasnake and a Tile Turtle (manga) 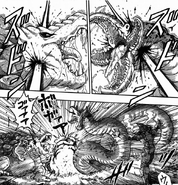 Jabrasnake and Tile Turtle defeated by Zyper by his shoulder guns