The Jidar Kingdom (ジダル王国, Jidaru Ōkoku) is a dangerous, crime-filled nation that is one of the few not associated with the IGO. The Gourmet Casino is the most famous tourist attraction there.

The Jidar Kingdom was a monarchy ruled by its king, Darnil Kahn. He was seemingly involved in all the Underground World affairs in the Jidar Kingdom, allowing them to continue their illegal affairs in exchange for keeping his coffers full. Despite how his country looked and ran, he was said to have quadrillions of yen in his coffers from the Gourmet Casino and other secret illegal ventures, but preferred to keep it all to himself, rather than using it to improve his kingdom. Darnil seemed not to place much interest in ruling his country, apparently having no law enforcement or laws to speak of, thus making Jidar a country of anarchy, governed only by the criminals of the Underworld. He also did not care in the slightest for his subjects' well being, having enough food for billions of people hidden away while they starved to death.

After Darnil Kahn leaves his seat as ruler of Jidar to pursue his goals as a member of NEO, the country becomes governed by the reformed Livebearer and his Underground Cooking World along with the Gourmet Yakuza, who rule the country splendidly; crime drops sharply and new efforts start to help the orphaned and abused children of the country.

Coco goes there as part of his training to enter the Gourmet World and to find information about Acacia's Full Course Menu drink, ATOM. Toriko, Komatsu, and Coco go to Jidar Kingdom looking for the Meteor Garlic. There, they re-encounter Match, who has become the current Yakuza boss, along with his Gourmet Yakuza, who are seen trying to decrease the sale of illegal products. 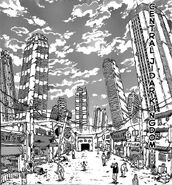 Jidar Kingdom (manga)
Add a photo to this gallery