They primarily inhabit jungle environments and are known to feast on both flesh and fruit. They usually crawl into the flesh of their prey, eating them from the inside out.

Their mandibles have extreme cutting power capable of severing a grown man's wrist in a single bite. Additionally, the sharp pincers on its head have enough cutting force to split a telephone pole in half. Like most insects they have ganglions (masses of nerve cell bodies) in every part of their bodies, giving them movement even if their bodies have been dismembered. Their armor-like shells protect them from most attacks. The only way to destroy their bodies is by aiming for their joints. Its air velocity rivals a speeding bullet, allowing it to rip through its targets. 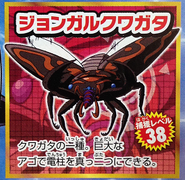