The King Land Shark (王陸鮫, Ō Rikuzame) is a massive land-dwelling shark beast from Area 2 of the Gourmet World. It is the Fish Dish in Jiro's Full Course Menu.[1]

It is a gigantic creature in size that even towers over Battle Wolves. It has most of the features of a shark such as facial structure, a tail fin and overall body shape, however it has four muscular legs which allow it to walk on land. It has deep black eyes with red pupils. Its back is covered in rows of numerous sharp spikes and its entire body is covered in what appear to veins or crack-like markings. Its mouth is wide and grotesque, having massive gums that make up most of it, rows of sharp pointy teeth surrounding it and it appears to have numerous tentacle-like tongues coming out of its mouth. In the anime it is portrayed with two varieties of skin colors; in Jiro's Full Course it has dark blue skin and in Starjun's description it has pale beige skin.

Not much of its true strength is known, however as it is a Gourmet World species with a capture level of 4450 it is clearly a powerful and fearsome beast and the fact that it was shown fighting a Battle Wolf pack is a testament to its ferocity. Another event showing its strength is the fact that Toriko is not willing to try and fight one of them on his own and would only attack if his partner, Starjun, was willing to do so. It is rumored to have no hesitation about attacking one of the Eight Kings, showing just how tremendous its power is.

King Land Shark meat is a rare ultra-high class delicacy of unmeasurable status, it is even the fish dish on the full courses of Knocking Master Jiro and his partner Setsuno. Its meat can be grilled and made into ultra high-quality sushi which is named King Land Shark Grilled Sushi (王陸鮫グリル寿司 Ō Rikuzame Guriru Sushi) can be made available at the Setsuno Dining Hall if a request and reservation is made years in advanced due to the rarity in which the shop opens and due to Setsuno needing to request Jiro for the ingredient.

One makes a small appearance fighting one of the few remaining Battle Wolf packs.[3]

It is listed as the Fish Dish of "Gourmet National Treasure" Setsuno's Full Course Menu.[4]

One confronts Toriko and Starjun within Area 2. It is here that Toriko uses his scanner to confirm its capture level, and plans on attacking it and eating with Starjun, until the appearance of a Battle Wolf makes them both hesitate.[5] 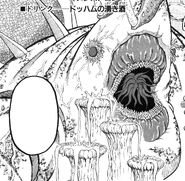 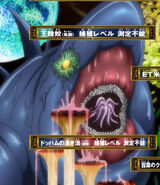 King Land Shark in the anime