It is an adult Cocoala. Knock-out Koalas typically act as leaders of Cocoala colonies and as such Cocoalas obey them without question and will even resign their usual peaceful disposition and become violent for the sake of their Knock-out Koala leader.

The particular Knock-out Koala encountered on Hungry-la Island, was noted by Toriko to be quite strong, fast and intelligent and that it may have been of a higher capture level than 5. Its intelligence was well noticed as after it ordered its Cocoalas to kidnap Komatsu and Nami, it used the fear it invoked into the other animals of the island to force them to distract Toriko and the Straw Hats while it attempted to devour their friends. During its battle with Toriko and Luffy it showed great strength, speed and sharp reflexes which it increased by skillfully using the tree stems of the Amatano Fruitby spinning around it (clearly showing its intelligence and resourcefulness during battle), and it once again showed off its clever resourcefulness by using Nami and Komatsu as living shields knowing that its opponents would not harm their friends. Despite its intelligence and power, it was eventually defeated by Toriko and Luffy's "Gomu Gomu no Kugi Punch" combo and was sent flying straight into the ice cream mountain. 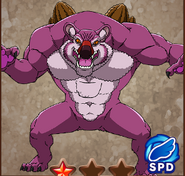