"Singer Chef" Koyubi, is the 26th ranked chef in the world listed on the IGO's Top 100 Chef Rankings. He is one of many renowned individual chefs participating in the 50th anniversary of the famed Cooking Festival to be the next "Supercook".

Koyubi seems to be a very tall man with some muscular build to him with a very slim face. He has a cleft chin, light skin (dark in manga), some stubble and a mustache. His hair has a outer round to it up top with sideburns that end in a circular shape inward towards his cheeks as well, making his sideburns resemble musical notes. He appears to wear a yellow jack with the collar that take star shapes along with sharp-sunglasses and a mic in his hand. His nose is almost visible only showing his nostrils and he wears what appears to be a traditional knot around his forehead which people in oriental countries (most notably the Chinese and Japanese) use to wear as the working man.

Not much of known about him yet, though he seems to have a liking for singing and he has great confidence in his cooking abilities.

Koyubi makes his entry in the Cooking Stadium as the 22nd participant, following "Underground Cooking World Boss" Livebearer. He was able to pass the three preliminary events: Triathlon Cooking, Scale Death Cooking and Entire Island Cooking. And was able to reach the Championship Cooking, where his opponent is Kamizaru. 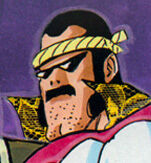