Lonely Grizzlies are giant bear beasts that are known for their solitary and very aggressive nature.

The Lonely Grizzly is a bear of great size, standing at around 16 meters in height and weighing over 12 tons it is beast to be feared and can crush a normal human like an insect. They have extremely muscular builds and sharp claws and teeth which gives them a very fierce appearance. They also have six yellow eyes with slit pupils.

Lonely Grizzlies live solitary lives, rarely interacting with other members of their kind, but if two males should face one another they'll become enraged and agitated and will engage each other in a fierce battle that may last for days or even months. It is unknown if females have similar behavior.

Lonely Grizzlies have a strong fighting spirit, however males of the species become even stronger and more fierce when in the presence of another male. Their stamina and fighting spirit is so great that they can keep on continuously fighting for a whole month.

Although normally their meat is too tough to be eaten, if they are kept with another male of their species, their meat gets tender due to the high battle spirit.

They can keep fighting for a month, and the moment the meat is of good quality, is only a few minutes during that time. The outer appearance doesn't change at all, so one must be able to hear the "voice" of the ingredients to be able to tell and knock them at the right time to preserve them. Because of this they are considered a "Special Cooking Ingredient".

Setsuno kept two male Lonely Grizzlies in the underground kitchen beneath her dining hall. She kept them together in the same room in order to make them fight, in order to get their meat to reach peak quality. They have been fighting regularly for over a month. Komatsu was horrified at the sight of them while Toriko was amazed with Setsuno's ability to keep track of them. 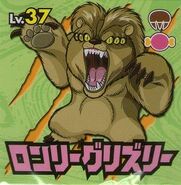 Lonely Grizzly Sticker from ver.3
Add a photo to this gallery
Retrieved from "https://toriko.fandom.com/wiki/Lonely_Grizzly?oldid=144161"
Community content is available under CC-BY-SA unless otherwise noted.