Warden Love (ラブ所長, Rabu Shochō) is the warden of Honey Prison and a member of Biotope 0. Her body is able to produce a large amount of pheromones that she uses to control prisoners and execution beasts. The only person her pheromones do not work on is Zebra, against whose discharge she objected because she has a crush on him.

She is a chubby pale-skinned woman of below average height who resembles a small child but is actually past middle age. She straight and short black hair that goes just low enough to cover her ears. She also has black beady eyes and a heart-shaped tattoo on each of her cheeks. She wears an odd hat in the shape of a bee's head that has the image of a heart right below the antennas. She wears a small long-sleeved dress with a stripe pattern and two rows of three buttons going down it. The words "LOVE" are also printed going down vertically on it. On the back she has two small bug-like wings attached to the dress. She also wears curly shoes.

When activating her pheromones, others will see her as a tall and attractive, voluptuous woman wearing revealing clothing which consists of her dress acting as a shirt, a pair of g-string panties and high-heel shoes.

Most of the time, the warden has an "in-control" type of attitude with most of the people she knows. When it comes to Zebra, she tries her best to get his attention. She also has fantasies of romancing Zebra, much to her subordinates annoyance. Her crush goes to the length where she wants to marry him someday and often dreams about it.

As the chief of Honey Prison, Love has complete authority over the personnel. The fact that she is a member of the 0th Biotope shows she can take on the beasts and environment of the Gourmet World.

She can use her wings to fly, as demonstrated in the 0th Biotope. She has great physical strength as she effortlessly open the giant door to her office despite her size.

Since Chin managed to call Love by name without making any mistakes,[1] it can be assumed that she has mastered Food Honor.

She has the ability to control her pheromones to keep the prisoners of Honey Prison in check with the sole exception of Zebra, who is unfazed by it (and also unaware that she is attempting the technique on him). However, they affected a fellow Heavenly King such as Toriko. It should be highlighted that her powers are great enough to allow her to join the 0th Biotope.

Love appears in front of Toriko and Komatsu as she opens the door to greet them. She then use her pheromones on Toriko and Komatsu (it took awhile for Komatsu to pick it up though), commenting on how they were not her type. Both of them later realize that she can use pheromones to control the prisoners and the beast in Honey Prison. Love refuses to release Zebra is that she is in love with him, due to him being able to resist her pheromones. As Love walk with Toriko, Komatsu, and Ohban she explains the reason why the Main Course is so vicious as it made for prisoners who a sentence to death. When they reach the execution chamber where Zebra is located, Love stated to cry as her love was going to leave soon.[2]

In the anime, when the IGO is about to prepare its yearly Christmas delivery, Love calls in Mansam telling him that the Freeze Season's Chill Rest Days in Death Season Forest have begun, and that it is the perfect time to harvest the Sweet Dew Tree. Patch of the Gourmet Seven goes with Johannes and some gourmet hunters to seek out the tree for the Christmas delivery, but they appear to become lost and even their gourmet hunters lose track of them, as their radios cannot be contacted. After the gourmet hunters return and inform Love, she fears the worst and calls in the Four Heavenly Kings to seek them out, however only Toriko, Coco and Sunny show up along with Rin and Komatsu, which greatly disappoints Love as she wished to flirt with Zebra. She then gives the group some Santa-themed winter clothing and sends them off to find Patch and collect the Sweet Dew Tree. While they're searching she throws a tantrum due to Zebra's lack of interest in seeing her, while Ohban tries to calm her down, he then reports to her about the awakening of the White Devil.[3]

At a meeting of Biotope 0, Love comments on the condition of master Chin, stating that the "old geezer" is too resilient to die so easily at the hands of the Gourmet Corp. She shouts in excitement and anticipation along with the other members as the meeting concludes on them finding Acacia's Full Course Menu. She then sets off from Cloud Tree.[4]

Love, Tack, and Rala reach Sector C, Stardust Road, to attain Acacia's Fish Dish, ANOTHER. The prison warden expresses amazement at the beauty of the environment, but Kuromado's arrival and the presence of some tamed Nitro surprises them. The Head Chef affirms they will not get to see another scenery like that and will soon be gazing at Sanzu River.[5]

Later on, after Midora and Ichiryu have finished their fight, Love is shown to have been defeated.[6]

Sometime after their defeat at the hands of NEO and the Gourmet Corp., Warden Love, Tack, and Rala made their way to Blue Grill, but sometime after their arrival, Love and Rala were possessed by Food Spirits due to the "Soul Trade" within Blue Grill.[7] As Kuriboh, Chin Chinchin, and Chiyo explore the streets of Blue Grill, they encounter the possessed Love. Tack calls to them from an alley[8] and later explains the events that occurred.[7]

After ANOTHER was prepared, Love's soul returned to her body and she accompanied the others to the surface.[9] She is part of the group that takes the Magneticlam to return to the Human World with ANOTHER.[10]

Love has been featured prominently in the Trading Card Game, appearing on a couple of cards. She has also been featured on collectible stickers in both her normal form and pheromone form. 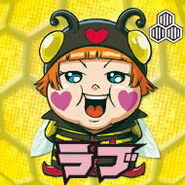