The Madam Fish (マダムフィッシュ, Madamufisshu) is the ruler of the lake Pot Pond. It is so rarely seen it is sometimes described as "phantasmal".

The Madam Fish is a very large fish, roughly the size of an Orca whale. It has feminine features, from which the name Madam Fish comes; these include its long 'hair', large round eyes with prominent lashes, and large lips. Its hair is either part of the fish's dorsal fin, or conceals it.

The Madam Fish seems to prefer to live in freshwater, and seems to stay in it's nest near the bottom of lakes to stay safe.

Madam Fish is an extremely cowardly creature that rarely comes out of its nest; at the most it leaves the nest once in a few decades. The only time it feels safe is when the lake where it resides is completely frozen over.

The Madam Fish seems to have sharp senses. Normal fishing techniques and netting techniques are impossible to capture it and a boat is immediately noticed by it.

In the video game series, the Madam Fish is shown to have a variety of different subspecies:

At Toriko and Rin's wedding reception, the Fish Dish, Ougai is served with King Vinegar sauce and slices of Puffer Whale, Shining Gourami, Madam Fish, and ANOTHER. 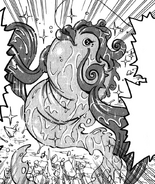 Madam Fish along with the other Ehou Maki's ingredients 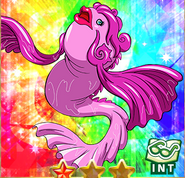 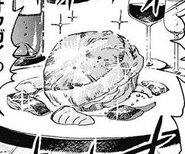 Fish Dish
Add a photo to this gallery
Retrieved from "https://toriko.fandom.com/wiki/Madam_Fish?oldid=145488"
Community content is available under CC-BY-SA unless otherwise noted.