Melk Mountain is a large mountain that is 4000 meters in elevation and it is here where the famed knife artisan Melk the First resided with his daughter Melk the Second. It is said that Melk the First himself built this mountain, hence its name.

Melk Mountain and the region surrounding it are mostly barren fields of stone with very little vegetation, although it is implied that a forest does exist somewhere within the area. The mountain itself is covered in countless giant spikes, making it impossible to climb normally. Fortunately the mountain itself has a path carved by Melk the First which is composed of about 20,000 giant steps, leading to the summit.

Melk Mountain is home to a wide variety of creatures, but despite its massive size it has no human settlements, with only a single human residing on its peak. The mountain has many wild beasts and is inaccessible through air due to the ferocious beasts flying around it. 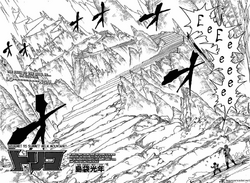 Melk Mountain (Manga)
Add a photo to this gallery
Retrieved from "https://toriko.fandom.com/wiki/Melk_Mountain?oldid=133827"
Community content is available under CC-BY-SA unless otherwise noted.