Melk Stardust (メルクの星屑, Meruku no Hoshikuzu) is a golden whetstone that was discovered in Heavy Hole by Melk the First.

These unique whetstones are only known to form deep within the depths of Heavy Hole, where they are quite abundant and form gigantic crystalline structures that shine like gold, making them quite a sight to behold. Even the dust made from these whetstones shines brilliantly and will cause any food that it is used on to shine just as beautifully.

It is said to be able to sharpen any material in the world. When sharpening materials that have a high hardness level, a unique and edible golden dust comes out of the whetstone that can be used as a seasoning.

This unique edible dust is composed of several new kinds of amino acids and never-before-tasted top quality savory components. Toriko, Komatsu, and Melk the Second were one of the first known individuals to have tasted Melk Stardust; but kept the flavor a secret to themselves due to the fact that the taste of the spice was more or less addictive due to its taste directly stimulating hunger, and would overwhelm the flavor of just about any food it was seasoned with unless they compliment each other, such as the Jewel Meat or the Shining Gourami. According to Komatsu: when he and Melk the Second tried it, they couldn't stop licking it.

Melk Stardust is one of the many ingredients on Ichiryu's List which Toriko has to capture in preparation for traveling to the Gourmet World.

Komatsu uses some of the Melk Stardust he had left to prepare the recently captured Shining Gourami. The enhanced gourami causes an incredible reaction within Sunny which leaves him in amazement. 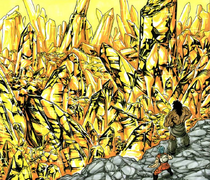 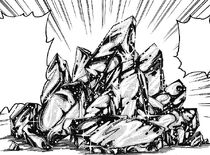 A block of refined Melk Stardust

Toriko, Komatsu and Melk the Second taste Melk Stardust on a pizza 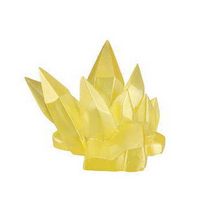 Retrieved from "https://toriko.fandom.com/wiki/Melk_Stardust?oldid=151057"
Community content is available under CC-BY-SA unless otherwise noted.