The carbonation feels like a firecracker, and the year-long fermented sugar is a hundred times sweeter than maple syrup. The carbonic acid exceeds both soda water and champagne combined, and the bubbles released from the Mellow Cola are said to remain in the air for a year. It is also shown to be a powerful energy source, completely reviving all cells in the body, completely restoring Toriko and Zebra, and evolving Zebra's Gourmet Cells.

Certain pain-inducing methods must be done in sequence to carbonate the sugary tears before they can be produced as Cola.[1]

Once done the oxidized scum on the surface of its tear glands are released, even the scum is high quality cola. Afterwards the true Mellow Cola is released, enough to cause a small flood and more than one person could drink alone.

The Mellow Cola was one of the items on Ichiryu's list as an ingredient for Toriko to capture in preparation for traveling to the Gourmet World.

The Salamander Sphinx is shown smiling despite crying from having been relieved of the pressure of the cola. Zebra decides to make it his Full Course's Drink, the first dish selected.[2]

During Toriko's and Rin's wedding, it was used in the Billion Bird Egg and was the final item served to everyone. Of course, it was a special blend mixed Mellow Cola in order to prevent the drinks from giving everyone the feminine appearance it normally gives those who drink the egg. 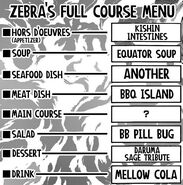