The Meteor Garlic, also known as the "Doping Garlic", is a rare and mysterious plant that is said to only grow where meteors have fallen on, but even then, only very rarely. The moment the plant starts to grow, it absorbs all the nutrients in the ground from the surrounding area. Due to the exceptional nutrients it holds, it acts like a very powerful stimulant that is strong enough to make anyone who eats it, power up and go nonstop all day and all night for a whole month without taking a single break. There are some restrictions from the "Eight Gourmet Laws" placed on this ingredient, likely due to the effects it has on the body.

It was first seen on the list of ingredient requests that Ichiryu gave Toriko help him prepare for the Gourmet World. As mentioned by Melk the First this is an ingredient that can't be retrieved by normal methods. The reason is because the locations it grows at is almost entirely random. Also due to its rarity it almost never shows up in any food channel, legal or illegal. Recently, Toriko and Coco have learned that the Gourmet Casino is giving away the garlic as a prize. Also as Toriko mentions, the obtaining of this ingredient serves as "Gambling" training.

While the Meteor Garlic's bulb is enormous, only a little clove in its center is edible. It is a specially prepared ingredient with a mountain of hardwork needed to prepare it. Komatsu managed to prepare it with the assistance of Livebearer. Most of the Meteor Garlic's layers fly off in to the meme like fireworks after it is cooked. The edible clove has a huge amount of nutrients, which can make even a normal human, like Komatsu, incredibly muscular while Coco whose Gourmet cells complimented the garlic became a muscular giant. The cloves outside has a crunchy texture similar to fried potatoes and the inside is moist like cream cheese.

At Toriko and Rin's wedding reception, it was served on top of the End Mammoth steak with sides of Jewel Meat and Galala Gator. 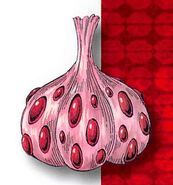 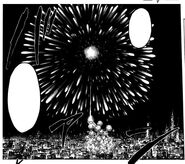 The Meteor Garlic's layers flying off into the sky. 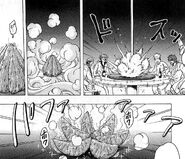 The effects of the Meteor Garlic on a normal human.

The group finding the Meteor Garlic.

Toriko about to enjoy the taste of the Meteor Garlic.

Toriko's opinion of the taste.

The effects of Meteor Garlic on Komatsu.

Meteor Garlic sticker.
Add a photo to this gallery